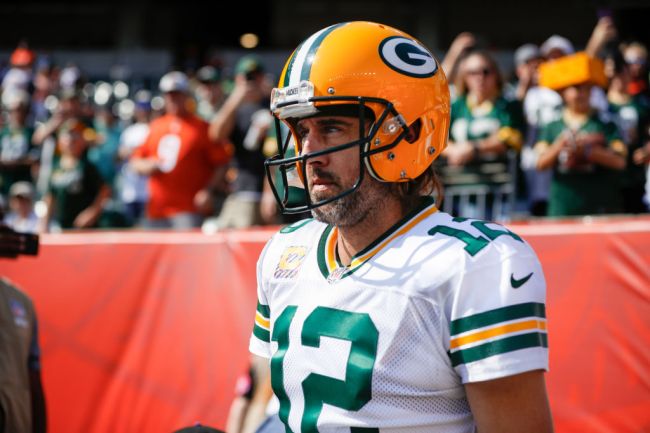 Aaron Rodgers, like most other NFL players, feeds off hostile environments on the road. He welcomes opposing fans talking trash and he loves to give it right back to them. The perfect example of this came this past Sunday in Chicago when he yelled ‘Owned you all my life…I still own you’ directly at Bears fans.

After the game, Rodgers said a bunch of Bears fans were giving him the middle finger, so he pushed back a bit with him letting them know he owns them. Rodgers does own the Bears, for what it’s worth, as he’s 22-5 against them all-time and 1-0 in their one postseason meeting.

Despite the hostility between himself and Chicago fans, Rodgers doesn’t think that Bears fans are the meanest or the best trash-talking fans in the game.

Speaking to the media earlier this week, the three-time MVP made his pick for the rowdiest fans in the NFL and his answer shouldn’t be a surprise.

The best trash-talking fans in the game crown belongs to Philadelphia fans. He even told a story about the first time he played in Philadelphia to back up his claim.

Rodgers with great Philly story. He says first game there, same fan kept yelling same thing: "Hey Rodgers, get the splinters out of your ass."

"By the time the 3rd quarter happened, I was impressed he still had it. So I turned and gave him a little wave."

You have to give credit where credit is due. Looking at Philadelphia as a whole, it is unanimously regarded as the city with the wildest, most rude, and most ruthless group of fans in North America.

If you’re not a Philly fan, you probably hate Philly fans, but if you do happen to be a Philadelphia sports fan, well, there’s nothing quite like it.