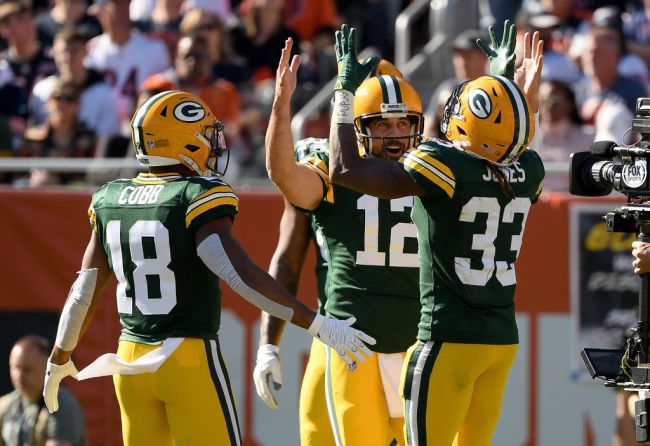 We now know why Aaron Rodgers lashed out at Bears fans on Sunday.

In the fourth quarter of the Packers-Bears game, Rodgers scored a crucial touchdown and began yelling out “I own you, I still own you” at Bears fans in the stands.

Aaron Rodgers to Bears fans "Own you all my life… I still own you" pic.twitter.com/SEr6bsKxs8

While speaking to the media after the game Rodgers said that he saw a woman giving him the double bird before he started yelling at the crowd.

Aaron Rodgers on what prompted him to yell what he did after his rushing TD: “Sometimes you black out. In a good way. I’ve definitely blacked out from a concussion, which isn’t a good way.”

Adds he saw a lady giving him the double bird in the front row. pic.twitter.com/nK6EZHaboO

We now have visual evidence of several Bears fans flipping off Aaron Rodgers after the play in question.

When #Packers QB Aaron Rodgers was asked postgame about his “I still own you!” comments to the #Bears crowd, he said: “Sometimes you black out on the field… I looked up in the stands and all I saw was a woman giving me the double bird"

Well – there were many of them. pic.twitter.com/hFMD7cvhwO