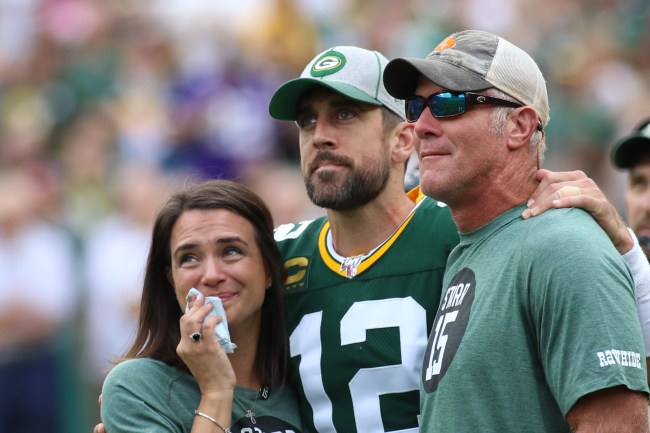 Aaron Rodgers and Brett Favre are both Green Bay Packers legends, as each has one at least one Super Bowl title for the iconic franchise, while setting numerous league passing marks along the way. While Favre was the man in Green Bay for 16 seasons, when the team selected Rodgers in the first round of the 2005 NFL Draft, the writing was on the wall that his time had come to and end.

Even as Brett Favre guided the Packers for three more seasons after Aaron Rodgers was drafted, during that time, rumors swirled about the relationship between both alpha quarterbacks, with Favre throwing gas onto the fire in 2005 when he said that it wasn’t part of his job to “get Aaron Rodgers ready to play.” Clearly, the now Hall of Famer wasn’t ready to hand over the starting gig to a young gun.

Since then, both Rodgers and Favre have openly talked about how their relationship has improved, with Favre saying over this past summer that they went from “strong enemies” to having a “very good” friendship these days. As for Aaron Rodgers, he recently talked about the topic with Pat McAfee, and, like Favre, said that the respect and relationship has gotten better over the years after being locked in a “power struggle” as Packers teammates.

“I love Brett, I always had a great appreciation for him but we were caught in the middle of a power struggle that unfortunately broke apart Brett and the Packers and Brett and myself,” Rodgers said of his relationship with Favre.

That’s a pretty candid reply from Aaron Rodgers, who added more to the conversation with McAfee while addressing the topic; which you can see below in the Twitter video.

"I love Brett, I always had a great appreciation for him but we were caught in the middle of a power struggle" – @AaronRodgers12 on his relationship with Brett Favre #PatMcAfeeShowLIVE on @DAZN_USA pic.twitter.com/pJsupWoQte

This tends to be the route most superstar athletes go as they age, isn’t it? While playing, egos can get the best of players, which leads to spite, tension and awkwardness — just look at what happened between LeBron James and Kyrie Irving in Cleveland. Over time, though, both take a step back and realize it was the spirit of competition that led to such a strained relationship, and things usually get fixed.

In the case of Brett Favre and Aaron Rodgers, it’s cool to see that it happened — because both are icons for one of the most polarizing franchises in all of sports. While things may have gotten off to a rocky start earlier on as teammates, they seem totally cool with one another now.