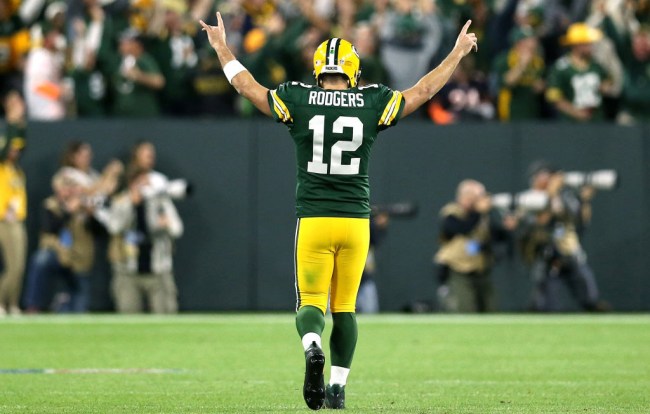 In case you missed it on Sunday, Aaron Rodgers injured his knee during the Packers game versus the Bears. He had to be carted off the field so it didn’t look good at the time. Shortly thereafter, however, Rodgers was back on the field leading his team to a big comeback win against the division rivals.

After the game, Rodgers was stopped by Michele Tafoya for an interview to discuss his injury and the sweet comeback. What he said to Tafoya was enormously overshadowed by how he said it, as he appeared to have developed an odd southern (?) accent as he talked about the game.

Naturally, the combination of Rodgers making such a miraculous recovery from what certainly seemed like a game-ending, if not season-ending injury, and his bizarre behavior during the interview, caused many who watched it to just assume that he was on some big-time painkillers.

Is Aaron Rodgers high during this interview right now. The man is trying to figure out if Mickey Mouse is a cat or a dog.

Whatever they gave Aaron Rodgers was a hell of a drug. Dude was so high in the post game interview he developed a southern accent.

On Wednesday, Rodgers claimed that he didn’t take ANY painkillers on Sunday, reports ESPN’s Rob Demovsky.

Aaron Rodgers called his injury a “sprained knee.” He said he didn’t take any pain medications on Sunday night because he doesn’t like them. “There was a lot of adrenaline,” he said, “and (it’s) pretty sore the last three days.” He said he feels “a little better every day.” He said he did not practice at all today and stayed at the stadium for treatment.

Okay, sure, sure he didn’t. So what happened to the southern accent when he called in to The Dan Le Batard Show on Tuesday, hmmm?

For some reason, fans believed Rodgers when he says he didn’t take painkillers about asmuch as believe he was actually injured in the first place.

that man was live off them pain meds after the game

“Aaron what was your Injury”?
Rodgers- “… Ma KNEE”. Dude was gone on some pills pic.twitter.com/pD56d7Mv2I

Homie was lit after that game

Bullshit. Dude was high as a kite after the game.

And on and on it goes.