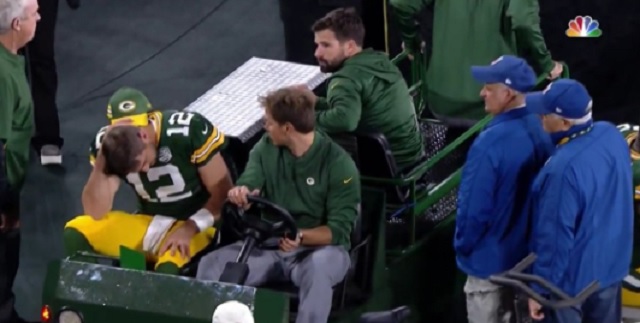 Two weeks ago, Green Bay Packers QB Aaron Rodgers signed a massive contract to stay with the team for the next five years.

The deal, which the Packers officially announced Wednesday afternoon, will pay Rodgers a reported $103 million in guaranteed money, according to ESPN’s Adam Schefter and other reports, and could reach a staggering total of $180 million over the next four years.

The contract would make Rodgers the highest-paid player in the league, averaging nearly $34 million per season.

Unfortunately for the Packers, Rodgers got injured in the first game of the season after he got sacked by Bears DE Roy Robertson. As you can see in the video below, Rodgers stayed on the ground for several minutes before walking off the field with a limp.

Aaron Rodgers appears seriously hurt. But limps off field on his own pic.twitter.com/Egy6wdVtaQ

Rodgers was visibly upset as he was carted off the field before halftime.

Aaron Rodgers had trouble putting weight on his left leg after Bears DE Roy Robertson-Harris sacked him and appeared to fall on his left knee. That's the knee that Rodgers had torn his ACL in high school and had fixed in college. https://t.co/gRRykEMzY4

Aaron Rodgers goes down, limps off the field pic.twitter.com/ZrAoMnWOgs

Please no. Not Aaron Rodgers. Not like this. pic.twitter.com/lYClDNThDA

Aaron Rodgers walks off the field with some assistance after being sacked on 3rd down. pic.twitter.com/iaxP235hjQ

Aaron Rodgers being carted off the field pic.twitter.com/TcisIcSbxf

Honestly feel sick for Aaron Rodgers right now. Such a great player, it’s a shame the end of his career might be marred by injuries

Live look-in at Packer fans with the Bears having Khalil Mack, up double digits, and Aaron Rodgers having been carted off: #CHIvsGB pic.twitter.com/DhhLgFsbv8