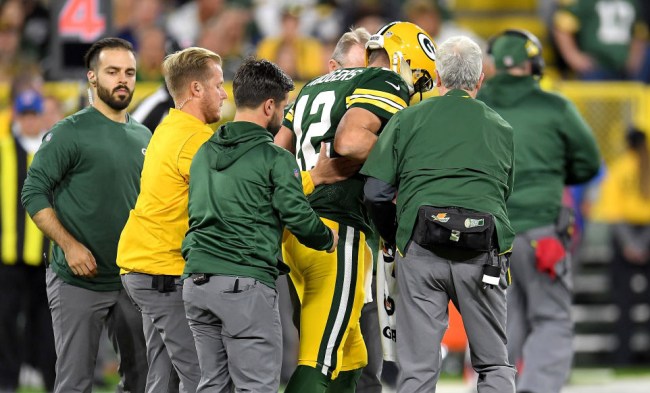 Poor Aaron Rodgers just can’t catch a break with NFL fans outside of Green Bay. It doesn’t matter that he is one of the best quarterbacks of his or any generation, NFL fans just refuse to cut the guy any slack whatsoever.

Everything from the size of his contract to who is or was in a relationship with seems to be fair game for criticism (even from his current girlfriend’s dad).

Bro can’t even get injured without NFL fans climbing all over him for allegedly “faking” it to make himself look good.

To be fair, that right there, didn’t look very good for Rodgers’ prospects of playing again on Sunday, and perhaps even longer.

But there he was, limping on to the field for the second half and driving his Packers to an epic comeback against their heated rivals the Chicago Bears.

Naturally, the internet being the internet, many on social media questioned the validity of Rodgers’ leg injury, even comparing him to Paul Pierce’s infamous return from a “devastating” injury in the NBA Finals.

@AaronRodgers12 “needing” the cart then coming back is like Paul Pierce needing the wheelchair in the finals. Fake and pathetic.

"I see you @AaronRodgers12 😏, but you are supposed to fake it in the finals, for FULL EFFECT," @paulpierce34 #AaronRodgers #CHIvsGB #Packers pic.twitter.com/WNgR2QBDhS

I love how Aaron Rodgers pulled of a LeBron James fake injury when nothing significant happened. Aaron Rodgers is a great quarterback and also an amazing actor!!

How the hell do the Packers come back in the 4th quarter after playing like absolute dog shit the first half? @AaronRodgers12, did you just need to fake an injury quick to get the attention back on you for a minute? Garbage 🚮

The so called "injury" that @AaronRodgers12 had was clearly fake no one gets carted off and then comeback to play like this like nothing happened.

So @AaronRodgers12 gets to go sit in the locker room, take a break, and work out the Bears defensive plays while they inject his leg full of drugs, and then come back out and act like they didn’t just cart his bitch ass off the field? Sounds like some #deflategate bs to me.

Not everyone was hating on A-Rodg though. Some guy named LeBron James seemd pretty impressed.

Woke up this morning saying to myself @AaronRodgers12 You’re INCREDIBLY GOOD at Football my guy! One of the 🐐’s! Thank you 🙏🏾

Of course, that comment just fed the trolls even more.

Aaron is the LeBron of the NFL, everyone knows he’s the most talented of all time, but Brady’s (and MJ’s) rings stand in the way of being anointed the GOAT

Seems appropriate that the two kings of exaggerating injuries to make “dramatic” returns to the game are patting each other on the back.