Aaron Rodgers Avoids Suspension, Only Fined $14k By The NFL For Violating Protocol, And People Were Mad 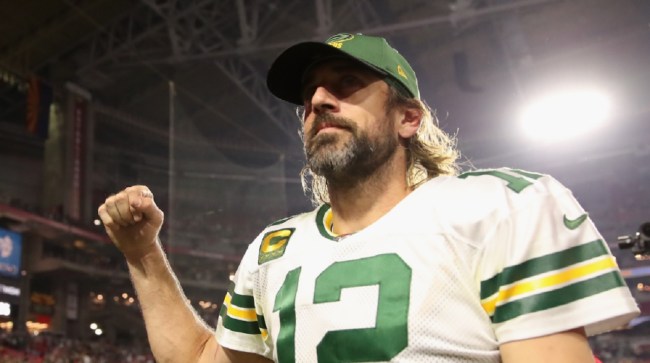 The NFL has finally punished Aaron Rodgers over Covid protocol violations and some people think that the Packers QB got a slap on the wrist by the league.

According to ESPN, the Packers were fined $300k and the unvaccinated Rodgers was fined $$14,650 for violating the league’s Covid protocol.

The NFL’s review of the Green Bay Packers’ COVID-19 protocols was completed Tuesday, and a league source said the team was fined $300,000, while quarterback Aaron Rodgers and receiver Allen Lazard were each fined $14,650.

They were fined for violations of the protocols that were jointly agreed upon by the NFL and the NFL Players Association.

The violations included the unvaccinated Rodgers not wearing a mask during his news conferences and because the team did not report that Rodgers and Lazard attended a Halloween party, even though it was away from the team facility. By attending, Rodgers and Lazard violated the protocol that prevents unvaccinated players from gathering in groups of more than three, which was the reason for their fine. The amount of the players’ fines were part of the jointly agreed upon fine schedule between the league and the players’ union.

Considering Rodgers makes millions of dollars per game, many felt that $14k was a light fine for what he did.

The $14,650 fine for Rodgers is peanuts, given that he violated COVID protocol during every single press conference with reporters present. He benefited from the fact that the Packers are tiptoeing on eggshells around him.

They suspended the GOAT Tom Brady 4 games cuz of DeflateGate and Aaron Rodgers got a minor $14K fine lmaooo for breaking covid protocols and lying to the media. pic.twitter.com/0Xm06F0Ldg

So DK was fined 7k for jumping on a goalpost but Aaron Rodgers fined only 14k for COVID violations……the league is such a joke no 🧢 https://t.co/oARP4ODEku

We now know that Aaron Rodgers lying about his vax status is worth about a $14k fine, which is just slightly worse than throwing a football into the stands two times pic.twitter.com/W5rYIBirOh

The NFL’s messaging has been so strong on their covid protocols and trying to motivate players to get vaccinated.

$14k 🤣🤣… Rodgers makes more than that per snap. https://t.co/wgjUQOkMtI