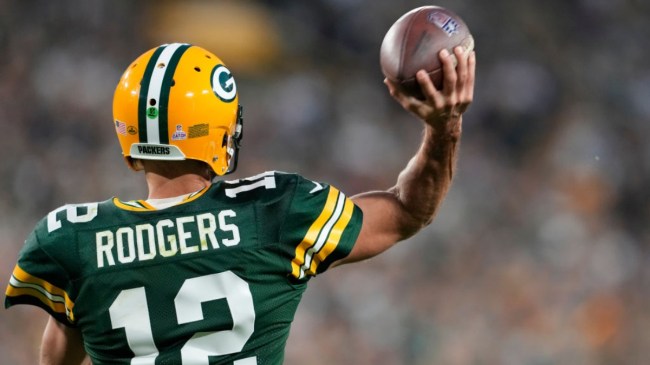 Over the past couple of seasons, Aaron Rodgers’ future has been the subject of a ton of speculation from football fans.

Last year, fans weren’t even sure that he was going to ply during the 2021 season until late in the summer. During the 2022 offseason, there was speculation that he could leave the Green Bay Packers to make a run at a Super Bowl with another franchise or that retirement was once again a possibility.

Despite all of that uncertainty and some major question marks at wide receiver, Rodgers and the Packers have once again gotten off to strong start, winning 3 of their first 4 games, including 2 against teams that made the playoffs last year.

In the past 2 wins, Rodgers and the Packers have begun to see the team’s young receivers make a bigger impact, especially Romeo Doubs. Today, Rodgers was asked how the development of Doubs and fellow rookie Christian Watson could impact his future.

He revealed that it might make him want to play.

Aaron Rodgers was asked today if emergence of Romeo Doubs and Christian Watson might make him want to play longer.

He mentioned a number of factors in his decision — physical, mental, personnel.

"Seeing the development of those guys can't help but be a part of the decision."

It’s a little bit early to tell what his future holds, but Romeo Doubs appears to be developing quite a rapport with Rodgers. With Allen Lazard stepping up last week and Watson still expected to be a deep threat for the team, Rodgers could have some good reasons to stick around for a few more years.