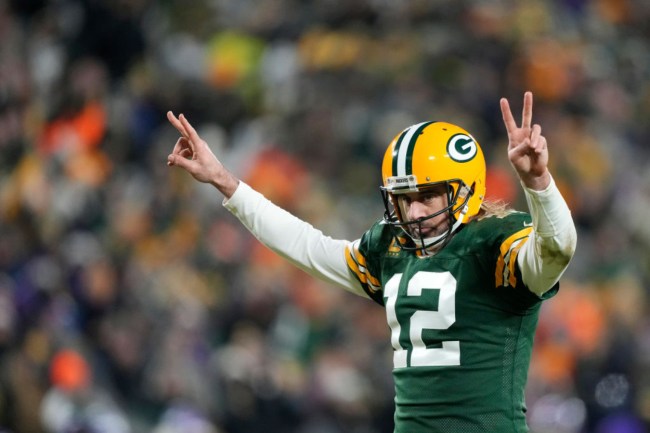 Aaron Rodgers admitting that he’s literally run out of f–ks to give isn’t the only thing he revealed during this week’s appearance on ‘The Pat McAfee Show.’ The future Hall of Famer also dropped some serious hints about his retirement.

Specifically, Rodgers shared information about what his retirement may look like.

Rodgers explained that he may take a page out of Barry Sanders’ book when he decides to hang up the cleats.

“If you remember, [Sanders] retired with a little note, like ‘hey guys, thanks it was fun I’m out.’ And I always thought that was cool,” Rodgers said. “He loved the game but he was not bigger than the game and I think that’s the way to do it.”

For a guy that let the world know that he doesn’t give a f–ck anymore, it’s no surprise that Rodgers would very nonchalantly call it quits whenever that time may come.

It’s also no surprise that Rodgers won’t be doing any sort of farewell tour at the end of his career.

The reigning NFL MVP, who turned 38 on Dec. 2, said he’s “never” wanted a “farewell tour” to end his career.

“I just think [farewell tours] have worked for some guys and great, cool. I respect that but that’s not something that I want,” he said.

Rodgers Has Been Talking About Retirement

This is now the second straight week that Rodgers has talked about retirement with McAfee.

During his appearance last week, Rodgers made it clear that he isn’t ruling out retirement at the end of the current NFL season. Given his most recent comments about how he wants his retirement to be low-key, it’s all starting to make sense now.

“I wouldn’t rule that out,” Rodgers said, while talking retirement after this season. “I’m just enjoying this season for this season, and I think playing next year will definitely be in the thought process. One of the things — wanting to not be a bum on the way out, and still being able to play [well] is important to me.”

At the end of the day, it wouldn’t shock anyone to see Rodgers retire at the end of the season, nor would it be a surprise to see him succeeded in the league for another few years.