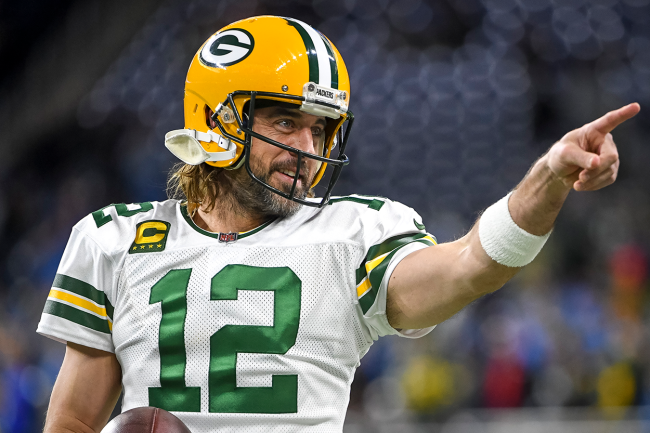 Now, during the offseason, Rodgers has already thrown his first of the new year.

A few NFLers showed up to JSerra High School in San Juan Capistrano for a flag football charity event last month. Rodgers was among them, along with his teammate Equanimeous St. Brown, Lions receiver Amon-Ra St. Brown and soon-to-be drafted quarterback Desmond Ridder.

During the event, Rodgers played quarterback and his team was lined up near the end zone when he got picked off. Wheeling University football commit Darius Maxwell, who spent last season with Saddleback College, hid behind a receiver for a moment before jumping the route and intercepting the reigning NFL MVP.

After making the interception, Maxwell jauntily ran over to Rodgers and savagely handed him the football. It was a vicious reminder that he had just picked off the NFL’s most valuable player.

But Rodgers didn’t like the celebration. Somewhat playfully, but somewhat seriously, the Packers quarterback turned around and chucked the ball at Maxwell.

Obviously, with Rodgers being Rodgers, he is going to catch a lot of unnecessary heat for the moment. He got got, got celebrated on, and threw back. No big deal, it’s all in good fun.

The exchanged bore a striking resemblance to Peyton Manning’s famously hilarious SNL skit when he was nailing kids with the football.

In the end, although it took a month to surface, the video is incredible. Maxwell will forever be able to say that he picked off Rodgers and proceeded to get under his skin with a savage, but standard, celebration.