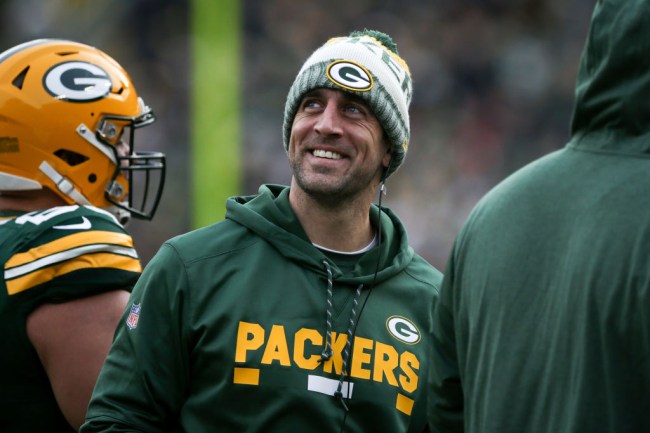 Aaron Rodgers is looked at as a rather reserved guy. Sure, he’s an assassin on the field and has popped up in a number of commercials over the years, but he’s never really been one to really open up about anything. Maybe it has to do with his somewhat well-documented fallout with his family, but that’s a story for a different day.

During an interview with the Army & Air Force Exchange Service, however, Rodgers spoke candidly about the coronavirus and its effect it may have on the NFL season and just how strange it would be to play without fans at Lambeau Field.

“I think it would be really strange [to play without fans],” Rodgers said. “I understand the state of the country for sure. But, there’s something special about Lambeau Field. We have the tradition and history of excellence in Green Bay that the NFL trophy for the Super Bowl is called the Lombardi trophy after our famed coach. We go to work in Green Bay every day on Lombardi Avenue. We play at Lambeau Field named after Curly Lambeau who started the team in 1919.”

His love letter to Green Bay wasn’t finished there. Rodgers really put into perspective what the Packers mean to the city of Green Bay.

“It’s just different in Green Bay,” he explained. “We have such a great interaction with our fans. We have thousands and thousands of fans at training camp. The businesses and the houses for rent on Lombardi and Ridge Ave. The community is really tied to the team, and so many great mom-and-pop businesses and restaurants and bars right there are contingent on us having games.”

Again, it’s not too often we see this side of Rodgers. It’s also worth noting that only a few months ago the Packers drafted quarterback Jordan Love and essentially didn’t draft any players that will immediately help Rodgers and the Green Bay offense. He said he wasn’t thrilled about the Love pick, but it’s clear he’s moved past that and is hopeful to have some sort of ‘normal season with fans in Green Bay.