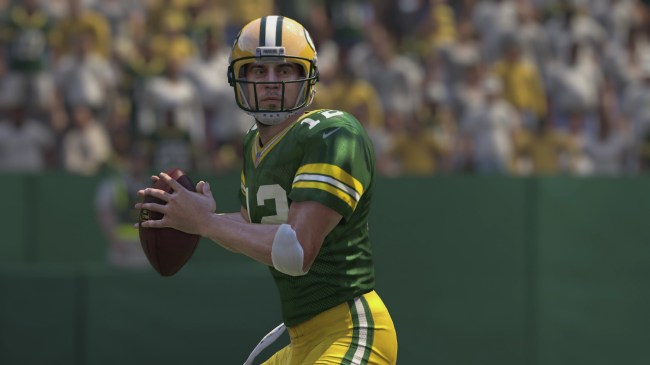 Aaron Rodgers is a former league MVP and Super Bowl champ. He’s one of the most prolific passers in NFL history. He’s a surefire Hall of Famer. As good as the Green Bay Packers’ legend has been in his career, the past few seasons haven’t been great for him — well, in the eyes of some Madden NFL 20 developers, anyway.

Not sure what those Madden NFL 20 folks are looking at, but, for some reason, Aaron Rodgers found his rating for this season’s game at 90 overall. Sure, that might seem like it’s good, but when you consider the dude was a 99 overall in last year’s game — and this year’s rating is only seventh-best among quarterbacks — it makes you wonder what caused the dip in Rodgers’ rating.

Well, we have our explanation, because a Madden NFL 20 designer named Andre Weingarten talked to Complex‘s Brian Jones about how designers and evaluators land on the ratings — which are often criticized by players themselves, with a few even lashing out after seeing what the game rated them. Here’s what Weingarten said about Aaron Rodgers’ dip in rating specifically.

“Rodgers has been kind of taking a bit of a downhill slope the past three years,” Andre Weingarten, Associate Franchise and Gameplay Designer for Madden 20, told Complex’s Brian Jones. “His accuracy has gotten progressively worse over the past two years and while he might’ve been playing hurt, we can’t really project how much that impacted him because we don’t know everyone who was hurt and how much it impacted them on a week to week basis. So we can only base it off of the film we’re seeing, and we saw a different Aaron Rodgers the past two years than we had seen in years past.”

Now, I don’t want to be a jerk or anything, but, over the past three seasons, Aaron Rodgers has thrown for more than 10,500 yards with 81 touchdowns and just 15 interceptions in 39 games. While the quarterback did miss nine games because of injury — and hasn’t led the Packers to the playoffs the past couple seasons — he’s still a pretty badass passer. There’s no way in hell you can convince me there are six signal-callers better in the league right now, but, according to Madden NFL 20, there sure are.

Obviously, a rating on a video game doesn’t matter much to Aaron Rodgers — or so I don’t think? — but it’s a little bit of a slap in the face to think that some people think his game has dipped so much that he’s not even a top-3 quarterback in the league right now. Maybe he’ll use it as motivation heading into the new season.