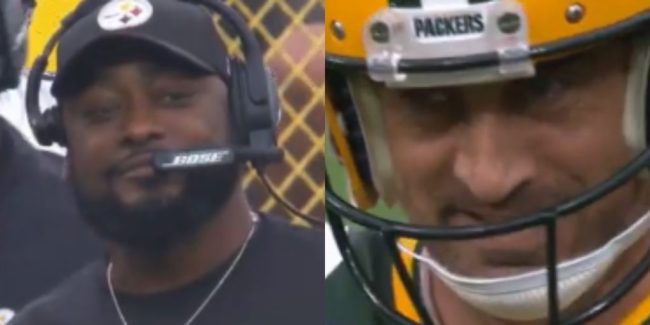 There was an interesting moment between Packers QB Aaron Rodgers and Steelers HC Mike Tomlin during their game on Sunday.

In the second quarter of the Packers-Steelers game, Rodgers tried to pull a fast one by attempting to get the Steelers penalized for too many men on the field by snapping the ball quickly. Tomlin noticed what Rodgers was doing and immediately called timeout to thwart the Packers QB’s plan. The two men would then look at each other and smile in a show of respect.

Fun exchange between Tomlin and Rodgers. Rodgers going hurry up, Tomlin calling a timeout with the defense not ready. Chess game. #Steelers pic.twitter.com/t830FsKtVP

It is worth noting that Rodgers gushed while speaking about Tomlin during an appearance on the Pat McAfee show.

“I have a ton of respect for Mike,” Rodgers said. “I think he’s a fantastic coach. I love the way that he leads. I love that way that he talks after the games. He always seems to keep things really even keel. Looks like he’s somebody that players love playing for.”.”

Fans were convinced that Rodgers will be going to Pittsburgh after his exchange with Tomlin.

Rodgers loves Tomlin. He can’t wait to play for him pic.twitter.com/3JxZnDvw1x

Mike Tomlin and Aaron Rodgers smiling at each other… Are they teammates a year from now?

Rodgers has been smiling at the Steelers all game long. He wants to be in Pittsburgh next year. #Steelers

Tomlin and Rodgers smiling together…

“Hey Aaron, it’s Coach Tomlin… Are you ready to be a Pittsburgh Steeler?”