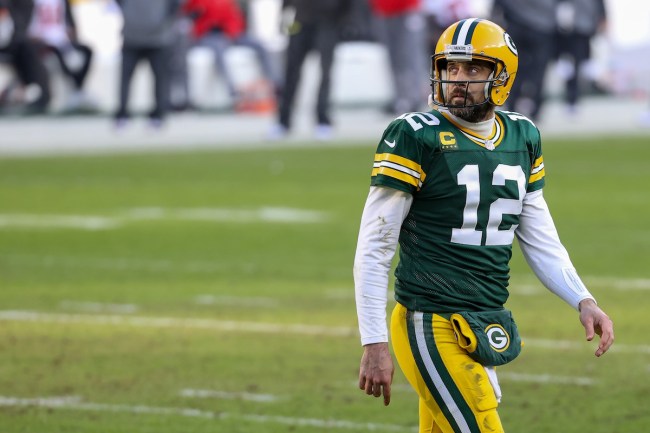 After losing the NFC Championship Game, Aaron Rodgers’ future is all of a sudden up in the air. Whether that means he’s thinking about retiring or that he doesn’t believe he’ll be back with the Green Bay Packers is even more of a mystery, with the future Hall of Fame quarterback sort of being vague when asked about what might come for him and the only NFL team he’s ever played for.

As most of us recall, Rodgers’ postgame interview after the NFC title game loss was… somber, to say the least. He sounded like he was at a funeral, and seemed to indicate (again) that his time in Green Bay could be coming to an end this offseason.

Aaron Rodgers after the game: “A lot of guys futures, they’re uncertain, myself included. … Just gonna have to take some time away and clear my head and kind of see what's going on with everything." pic.twitter.com/3GlzPU9EsZ

Naturally, Aaron Rodgers was probably just frustrated, hurt and feeling all sorts of emotions following such a devastating loss that could’ve sent him to Super Bowl 55. But, because sports media loves to speculate, reporters had a field day with this one, assuming the quarterback was ready to bolt Green Bay for greener pastures following the NFC Championship Game. But Rodgers tried to explain himself Tuesday when talking to Pat McAfee and former teammate A.J. Hawk, saying he was just being honest about the situation.

"I don't feel like I said anything that I hadn't said before.. It was just more of a realization I think that ultimately my future is not necessarily in my control…

With so much drama already surrounding the Aaron Rodgers-Green Bay Packers relationship — and we’re not even into the offseason yet — there’s a lot of people sitting back like Kermit the Frog watching while sipping tea. Does any of this sound familiar? Of course, it happened over a decade ago with Brett Favre and the Packers, where a iconic figure waffled between wanting to play, wanting to leave and… well, not knowing what he wants.

Knowing how the trajectory of this thing’s currently going, CBS Sports‘ Jason La Canfora reached out to NFL coaches and executives to get their thoughts on how it might end up. When texting with one current head coach, this is what La Canfora received back.

“We had a good laugh, and the coach did not in any way push back on my case for how difficult it would be for his organization to execute a trade for Rodgers. He acknowledged all of it, in fairly blunt terms, himself. And yet he would not give up hope in making it happen, despite the odds. And the sentiment he expressed has been echoed by other coaches, general managers, executives and agents around the league over the past two days, all of whom are convinced a bitter divorce is pending between one of the greatest quarterbacks of this or any generation, and the storied Green Bay Packers.”

So, yeah, lots of people around the league are seeing the similarities between how Favre left the Packers and what Aaron Rodgers is going through with the franchise now. Even though Packers CEO Mark Murphy has shot down the idea that Green Bay’s looking to move on from their signal-caller, some executives wondered to La Canfora why Murphy wouldn’t just communicate with Rodgers before putting out such a statement.

“How about talking to your quarterback first before you put out that statement, or just waiting to see if he says it for himself?” a ‘long-time NFL executive’ said to La Canfora, in response to Murphy’s insistence that Aaron Rodgers will be back. “Totally tone deaf. That’s exactly what not to do. That thing is going to go nuclear. Trust me. The quarterback wants out.”

The fact that one front office person used the words “nuclear” to describe where the Aaron Rodgers-Packers relationship could be heading is obviously a bad sign for Green Bay fans. And while Brett Favre himself tried to defend his former teammate by saying Rodgers was just emotional after the NFC Championship Game loss, it’s pretty easy to see that the writing might already be on the wall, and that the likely league MVP from this season will be gone.

Sure, there’s talk that Rodgers just wants a new contract with the Packers, and there’s probably truth to that. But it’s hard to repair relationships between a franchise and a star player, especially if that player’s an icon who seems to already be checked out and looking for a new challenge.