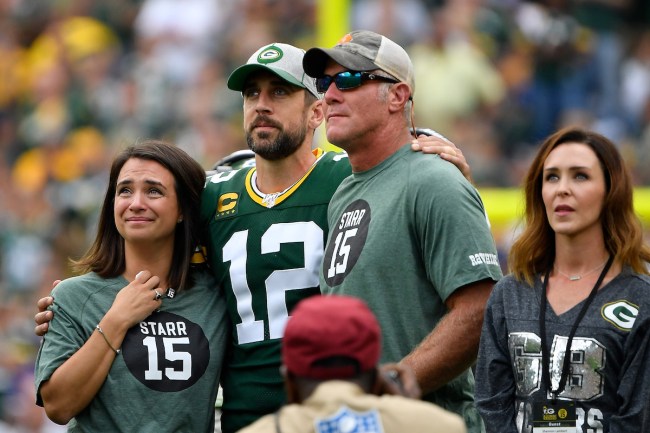 When Hall of Fame quarterback Brett Favre played for the Green Bay Packers, he was as dominant as any player in the league. From 1995-97, the Ol’ Gunslinger had a record of 37-11 as a starter, tossed 112 touchdowns to just 42 interceptions, and guided the Packers to the NFC Championship Game in each of those seasons, reaching the Super Bowl twice. It all culminated during the 1996 season, as Favre won his only title with the iconic franchise.

Fast-forward to 2005 and the love affair between Brett Favre and the Packers began to grow sour, with the team drafting Aaron Rodgers late in the first-round of the 2005 NFL Draft. After a few seasons of dysfunction between the two quarterbacks, Rodgers eventually took over the team, guided Green Bay to a Super Bowl title of his own during the 2010 NFL season, and became a future Hall of Famer himself. Hell, even at age 37, there’s a good chance Rodgers takes home the NFL MVP for his absurd regular season.

As great as Rodgers was for the Packers in this, his 16th season in the league, there’s speculation that he could either call it quits and retire this offseason, or end up signing with another team. Whether it was the mood with which the signal-caller addressed the media after the NFC Championship loss, or previous statements hinting that his future in Green Bay is uncertain, there’s a somber mood surrounding the franchise leader right now.

While that dark cloud may be hovering over the Packers organization, Brett Favre is pulling his best Rodgers and reminding everybody to “RELAX,” saying fans shouldn’t read too much into the comments from the quarterback following the loss in the NFC Championship.

In an appearance on SiriusXM NFL Radio Monday, Favre downplayed his predecessor’s remarks, and claims emotion and frustration played a big part in what Rodgers said.

“I wouldn’t pay much attention to it,” Favre said on Monday. “I think frustration, disappointment, hurt, pain, all were in that soundbite.

“Look, there’s no way the Packers would do anything to jeopardize losing Aaron [Rodgers], unless Aaron just chooses to retire, which I would be shocked. The guy’s playing better now than he’s ever played, and without him, you certainly wouldn’t have been even close to where you were [Sunday]. And I think the same will go for next year, and really the next few years, if he chooses to play.

“I wouldn’t pay much attention to what he said. I’ve been there. It’s so — I mean, it hurts. It’s painful. The last thing you want to do is think about next year, because you just had a major disappointment, and that’s what you’re hearing in that soundbite.”

Brett Favre’s probably right here, but there’s one underlying issue that he’s forgetting about: Jordan Love, whom the Packers selected in the first-round of the 2020 NFL Draft.

Similar to what Favre went through himself after Green Bay picked Aaron Rodgers in 2005, the Packers already have their heir apparent at quarterback on the roster. Rodgers expressed frustration with the franchise after the team’s decision to choose the young signal-caller, and it led to speculation even before the season that he could be positioning himself to leave Green Bay.

Nobody knows for sure what Aaron Rodgers is thinking right now when it comes to his future — not even him. So Favre’s probably right in assuming fans need to take a deep breath following the quarterback’s comments after losing in the NFC Championship Game, because a lot of that was raw emotion. Still, the writing’s been on the wall for the past few months that a divorce between Rodgers and the Packers could occur, and it stems beyond just a heartbreaking playoff defeat.