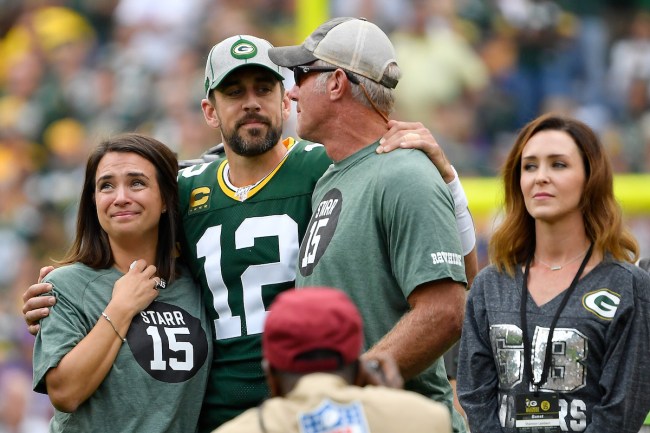 Aaron Rodgers may very well be on his way to a third league MVP award this season, with the 37-year-old quarterback of the Green Bay Packers playing really pissed off and out to prove himself. But the future Hall of Famer was once just a runt of a rookie who was in the shadow of another all-time great in Green Bay, Brett Favre, for whom Rodgers backed up for three seasons.

While the tension between Favre and Aaron Rodgers while they were teammates is well-documented, both have since mended fences and have actually developed quite the friendship these days. That doesn’t mean there aren’t some interesting stories from their days together in Title Town.

One of them was recently told by Rodgers to ESPN, with the quarterback remembering an odd responsibility he had as a rookie. It wasn’t collecting dirty laundry. It wasn’t carrying helmets and pads. It wasn’t fetching donuts for the offensive lineman. No, it was pretty much babysitting Favre, with the signal-caller recalling how his coaches literally made Rodgers hunt down Favre prior to meetings in the team facility.

“A lot of my time was spent walking around, looking for Favrey,” Rodgers recalled Wednesday. “That was one of the my responsibilities as a rookie was trying to figure out where Favrey was at sometimes and head into the back to see where he was he was hanging out and say, ‘Hey, Coach Bevell wants you.'”

Bevell served as Rodgers’ first position coach in the NFL.

Of all the off-the-field tasks that rookies in the NFL have to go through, this one by Aaron Rodgers seems unique. Like, c’mon, Brett Favre was a grown-ass man, why in the hell did he need a first-year guy to keep tabs on his whereabouts? It only adds to the legend of the Ol’ Gunslinger, who definitely played by his own rules as a player and proved to be a character.

Thankfully, these types of responsibilities are no longer on Rodgers’ to-do list day in and day out, and the quarterback can just focus on carving up defenses each week. That doesn’t mean that Jordan Love — the current Packers backup QB — might not have the same kind of task as Aaron did years ago.