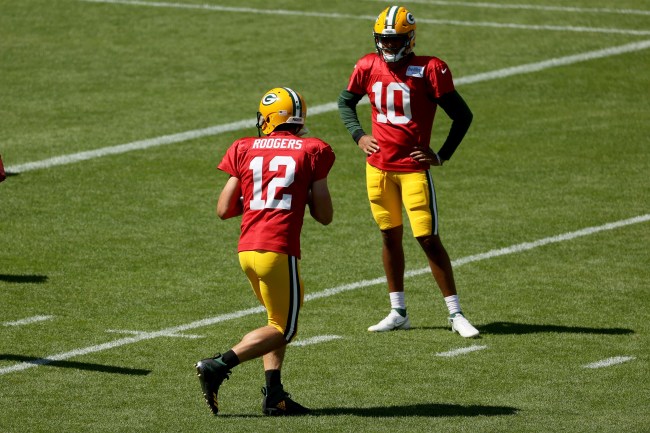 After Trent Dilfer won a fucking Super Bowl with the Baltimore Ravens, all of a sudden, the dude was taken seriously with some of his hot takes. That’s not to spew hate towards the guy — I actually kind of liked that whole “Dilfer’s Dimes” segment when he was with ESPN years ago — but, man, give someone a little championship jewelry and they all of a sudden become an expert.

While Dilfer has said some bogus shit as an analyst over the years, he recently brought up an interesting point regarding the Green Bay Packers’ quarterback situation. As we all know, the Packers selected Jordan Love in the first round of the 2020 NFL Draft, which led to lots of speculation about the future of Aaron Rodgers — which included the future Hall of Famer himself, as Rodgers even suggested his run in Green Bay may be over in the next season or so.

Although some wonder if Aaron Rodgers will be replaced by the rookie sooner rather than later, Trent Dilfer actually thinks the opposite, saying that the Packers partially drafted Love to piss off Rodgers, knowingly getting under his skin to push him even more during the twilight of his career. Here’s what Dilfer told Ryen Russillo when asked point blank if that’s part of the reason Green Bay chose a signal-caller so early in the draft.

“Heck yeah, and you get a really talented player that needs two or three years to develop,” Dilfer said. “Yeah, you do. You absolutely do. You’re a puppet master if you’re running an NFL organization. You’re pulling the strings to get the most out of the people you have and sometimes that hurts feelings and sometimes that’s not nice.”

It’s an interesting suggestion, but one that may have worked — at least after Week 1 of the NFL season, considering Aaron Rodgers threw for 364 yards with four touchdowns and zero picks in a win against the Minnesota Vikings. Rodgers even said that the selection of Jordan Love in the draft drove him to taking shots of tequila, and it seems to have lit a fire under him to prove himself. If that’s what the Packers’ strategy really was, well, the great ones take that challenge head on and try to silence the doubters.

Who knows what happens with Rodgers and the Packers in the future, but Trent Dilfer’s suggestion to Ryen Russillo makes you wonder if Green Bay’s front office really is acting as a “puppet master” in order to get the best out of their longtime quarterback as they groom the young Jordan Love for the next few seasons. It’s something that happened between Rdogers and Brett Favre years ago, so, hey, they may be trying to repeat history. If so, it’s genius.