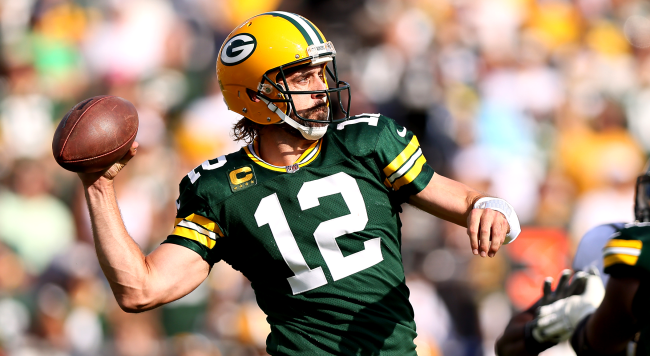 Aaron Rodgers played so poorly in the Packers’ 38-3 drubbing at the hands of the New Orleans Saints was so bad that he literally could have thrown the ball on the ground 28 times in a row and would have had a better QB rating than he ended up with on Sunday.

The game got so out of hand that eventually the 2020 NFL MVP found himself on the bench as backup QB Jordan Love saw the first on-field action of his career in mop-up duty.

Conspiracy theorists even wondered if Rodgers was deliberately playing so poorly during the game on purpose in an effort to get the Packers to trade him.

“Absolutely embarrassed us today,” Packers coach Matt LaFleur told the media after the game. “You can’t do that against a well-coached and quality football team. Our guys are going to have to take a long, hard look in the mirror. It starts with myself. I obviously didn’t get these guys ready to play ball, and that’s what happens when you go out there and play like that against a good football team.”

Rodgers too spoke to the media after the blowout loss, and when asked if the Packers may have been too overconfident after all the preseason hype about how good the team would be, replied, “Yeah, I think so. I think there’s probably some of that. We probably felt like we were going to go up and down the field on whoever they had out there, and that obviously wasn’t the case today.”

But it wasn’t so much what he said that got fans’ attention, it was his gritty, dejected, slicked-back hair and beard look that had Twitter talking, and making memes.

when you’ve got no choice but to testify against your buddy for a reduced sentence pic.twitter.com/yhwzUm2fvb

Stop sending me this shit pic.twitter.com/vYzOP5b43q

Why does Aaron Rodgers look like he steals catalytic converters? pic.twitter.com/HWxeThz8CU

I haven't seen Aaron Rodgers so bummed since Mac and Charlie last visited him in prison. pic.twitter.com/o5fO82qaGi

Aaron Rodgers looking like a combination of Mac and Mac’s dad pic.twitter.com/bDFf5Hjk4h

Aaron Rodgers man bun also looks like he’s growing his hair out to be Terry Silver. Is he opening a karate dojo? pic.twitter.com/AntXHwbDNA

Why Aaron Rodgers look like he works at Trader Joe’s #Packers pic.twitter.com/okgox39jjG

Is @AaronRodgers12 looking more like George Carlin every day is it just me? pic.twitter.com/Uo7wi8exo7