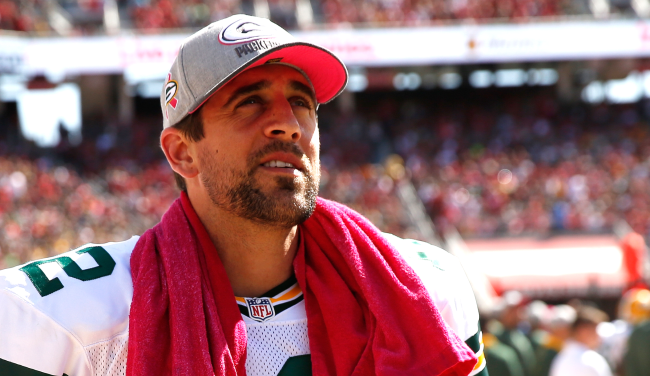 What would you do if you were Aaron Rodgers? Make $500,000 for attending the Green Bay Packers voluntary OTAs? Or chill in Hawaii, singing, dancing, and man-bunning it up in some waterfalls with your fiancee Shailene Woodley, your new BFF actor Miles Teller, and his lovely wife Keleigh Sperry?

I suppose if you are Aaron Rodgers and you just came off winning the NFL MVP Award and will have made over $314 MILLION just in salary by the time your current contract ends, the decision is a pretty easy one: you chill in Hawaii.

“Ponds with soulmates,” Sperry captioned a photo of the two couples hiking through the Hawaiian wilderness and jumping off of waterfalls on Tuesday.

Related: Aaron Rodgers Says His Favorite Thing To Do With Shailene Woodley Is ‘Cuddle Time’

Later in the day, Sperry shared a photo of the two couples back in their house in Hawaii looking like the four happiest people on the planet.

She also dropped a not-at-all cringey video of her and Aaron Rodgers singing a duet to “The 1” by Taylor Swift.

Rodgers, who appeared with Kenny Mayne during his final ESPN show on Monday, said about his bickering with the Packers, “With my situation, look, it’s never been about the draft pick, picking Jordan [Love]. I love Jordan; he’s a great kid. [We’ve had] a lot of fun to work together. Love the coaching staff, love my teammates, love the fan base in Green Bay. An incredible 16 years.”

There is zero chance Rodgers comes back and plays for Green Bay in the fall, right?

“It’s just kind of about a philosophy and maybe forgetting that it is about the people that make the thing go,” Rodgers continued. “It’s about character, it’s about culture, it’s about doing things the right way.”