Brett Favre On Aaron Rodgers Returning To The Packers: ‘I Don’t See That Happening’ 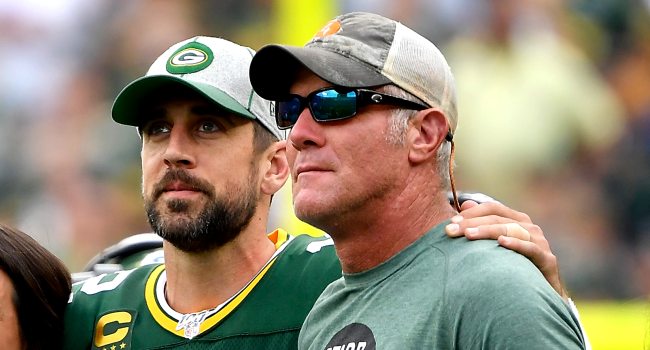 On Wednesday, Hall of Fame quarterback Brett Favre was asked about the tense Aaron Rodgers situation in Green Bay on ESPN’s Wilde & Tausch radio show. He responded by saying he is “not very optimistic” that there is any way the 2020 NFL MVP returns to the Packers at this point.

“Boy it’s a good question; that’s the million dollar question,” Favre said during the interview. “I think I know Aaron fairly well, and honestly I just don’t see him coming back and just saying, ‘All right, let’s just bury the hatchet, whatever caused the rift, and I’m just going to come back and play because I love the guys, I love the Green Bay fans’ … I assume he does, but his rift isn’t with the fans or the players. It’s with the front office. Will he just swallow his pride and come in? Maybe. But I don’t see that happening.

“If there’s not a trade, my gut tells me that he’d rather sit out than play. That’s just my gut. There’s no reason for me to say that other than that’s what my gut’s telling me, and I think you guys know Aaron fairly well enough to sort of feel the same way.”

Favre also compared the Aaron Rodgers situation to the one that led to Barry Sanders’ surprising retirement just prior to the 1999 season.

He also added that he texted Rodgers last Thursday and joked that Aaron should come play for the Saints, the team Favre grew up a fan of as a kid in Mississippi.

Rodgers’ replied that it would be unlikely for that to happen, adding, “Thanks for checking on me. I’ll touch base with you after all this is over.”

Whatever Rodgers decides to do, Favre is hopeful he will choose to return to Green Bay, if for no other reason than to win another Super Bowl there. If Rodgers does that, then he can walk away on whatever terms he wants.

“He’s been there as long as I was there, and I know what that means, and he’s put up unbelievable numbers. Win another Super Bowl and then do what you want to do, whether it’s keep playing, play somewhere else, whatever. But win one more in Green Bay and go out the way you want to go out.

“You don’t want to go out this way, whether it’s sit out or play somewhere else.”