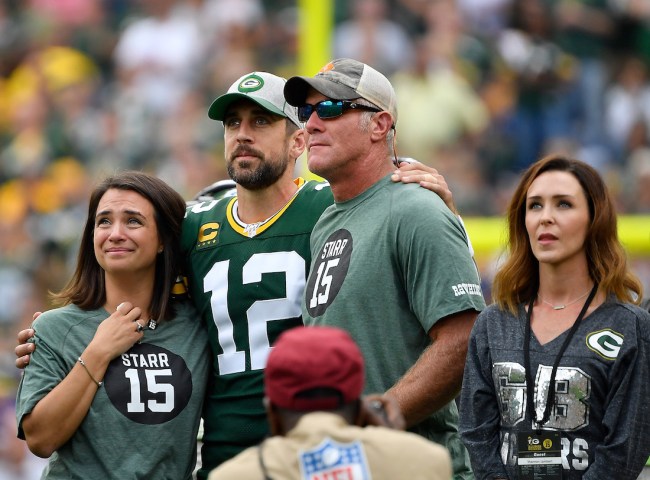 It’s funny how history repeats itself, huh? Back in 2005 when Brett Favre was guiding the Green Bay Packers and on his way to a Hall of Fame career, the team selected Aaron Rodgers in the first round to groom as the heir apparent to the three-time league MVP. It caused dysfunction and, eventually, a split between Favre and the organization, while opening up the door for Rodgers to take over the team.

Both Favre and Rodgers have talked about how difficult that situation was for both of them in the moment — and only since built a friendship over the past couple of years — so the ongoing drama between the Packers and their current, future Hall of Fame signal-caller eerily resembles those former circumstances.

Similar to how Green Bay selected Aaron Rodgers in 2005, the team did the same thing by choosing Jordan Love in the first round in the 2020 NFL Draft, setting off a firestorm with its iconic quarterback. While we heard stories about Rodgers’ unhappiness last offseason, the past few months have given us hints of retirement, allegations of unhappiness, reports of threats against the team’s GM and plenty more.

Considering Brett Favre lived through something similar with the Green Bay Packers 16 years ago, what’s his thinking about the situation? Well, talking to WISN-TV in Milwaukee, the Ol’ Gunslinger weighed in — and it’s not great news if you’re a Packers fan. Favre claims Rodgers “ain’t budging” in his stance against the team, and, even if things are cleared up between both sides, the former quarterback still sees the reigning league MVP forcing his way out of town.

“Knowing Aaron, and I think I know him fairly well, if he has a grudge, whether it be against the organization or a player or an arch rival, family, friends, he ain’t budging. I don’t see him coming back if this is not resolved, whatever the issue is. Even if it’s resolved but he feels like they have one up on him, he ain’t going to play. Knowing Aaron, he would sit,” Favre said.

Given the relationship between both Favre and Rodgers, the Packers great might have a little intel on what’s going on in the quarterback’s mind right now. The two have known one another for over a decade, and, while most of those years were spent as combative due to their competition with one another, it’s since been authentic.

Nobody knows for sure what Aaron Rodgers wants right now, as rumors swirl about him possibly forfeiting millions to retire or sit out next season, with some even speculating the quarterback could end up hosting Jeopardy! full-time instead of playing football. It’s daily drama that’s intriguing to follow, and one that Brett Favre understands well after living through something similar himself 16 years ago — so it appears he may think there’s no point of return between Rodgers and the Green Bay Packers.