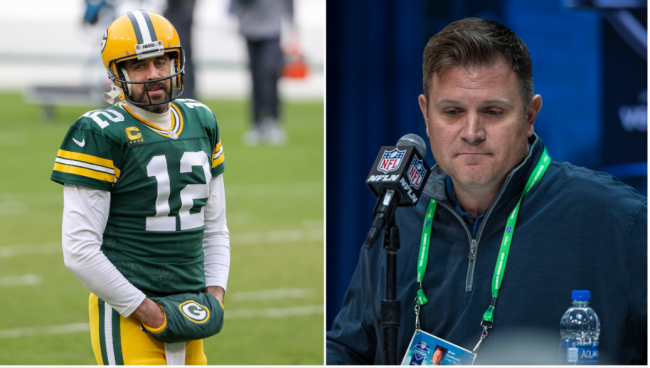 Aaron Rodgers’ relationship with GM Brian Gutekunst is reportedly fractured beyond repair and things are starting to get ugly in Green Bay.

On Saturday, Yahoo Sports’ Charles Robinson revealed that Rodgers is serious about not returning to Green Bay if Gutekunst is still the GM of the team. Apparently, Rodgers is willing to retire instead of playing under Gutekunst for another season.

If Aaron Rodgers and Green Bay dig in heading into the 2021 season, the same heated scenario between Carson Palmer and the Bengals could easily play out again.@CharlesRobinson writes ➡️ https://t.co/5NelI0cr2v pic.twitter.com/NOMdBElsxO

The reigning league MVP remains adamant that he won’t return to the team under the current stewardship of general manager Brian Gutekunst, a source in Rodgers’ camp said, and that he’s willing to weigh hardline options at his disposal — from refusing to show up for offseason activities to holding out of training camp and possibly retirement.

Asked if anything could be done to repair the relationship between Rodgers and the team, the source said a reconciliation may not be possible if Gutekunst remains and that team president Mark Murphy is aware of the quarterback’s feelings about the general manager.

Robinson added that Rodgers is still angry at Gutekunst for drafting QB Jordan Love and believes the Packers GM wants to replace him with Love sooner than later.

The fracture points between Rodgers and Gutekunst largely revolve around the drafting of Jordan Love in 2020 without Rodgers having knowledge of the move. Since then, the source said Rodgers has believed that it was Gutekunst’s plan to move on from him after the 2020 season — but that Rodgers smashed that with his MVP performance

Rodgers’ response, according to the source, was he presented the Packers with an opportunity to re-commit to him after the season with a new contract (with new guaranteed money) that would ultimately cement Green Bay’s “all-in” embrace of him as the starting quarterback for at least the next two seasons. The source said the Packers were not initially willing to consider anything beyond a modest restructure of Rodgers’ contract that would have done little more than guarantee the 2021 season.

His suspicion that Gutekunst wants to ultimately move the team toward Love sooner than later has brought Rodgers to the brink of no return.

Gutekunst remains adamant that he’s not going to trade Rodgers and believes they can work through their issues.

#Packers GM Brian Gutekunst on Aaron Rodgers: “Obviously, he’s our quarterback. He’s our leader. We’ve been working through this for a little while now. It may take time but he’s the guy that makes this thing go.”

If Rodgers does decide to retire, he will have to repay the Packers $11.5 for the next two years.

If Aaron Rodgers retires (to host Jeopardy or just retire), he would have to repay the team $11.5M this year and $11.5M if he remains retired next year — all from his signing bonus. Unless the situation is repaired to his liking, this is a serious consideration, I’m told. https://t.co/kEQwpexqX0