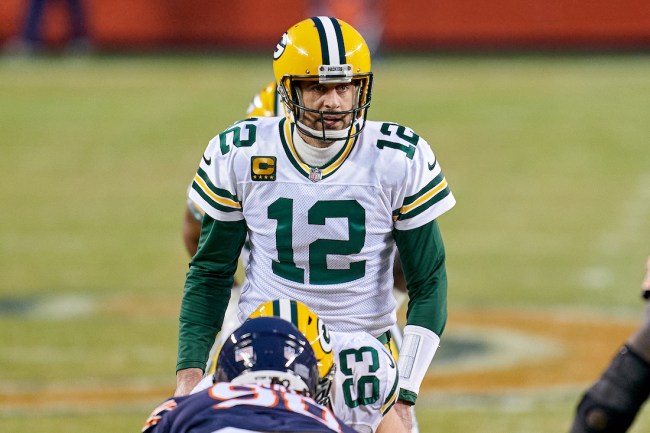 What in the Sam Hill is going on between Aaron Rodgers and the Green Bay Packers right now, guys? This is the reigning league MVP, who, even at 37 years old, just proved that he’s still one of the best players in the NFL after helping guide his team to the NFC Championship Game. Yet, somehow, he and the franchise are at a crossroads as reports fly about his unhappiness in Green Bay.

From Rodgers reportedly telling teammates he’s all but done with the Packers, to the quarterback ignoring questions about his future with the team while in attendance at the Kentucky Derby, it seems drama really is following him wherever he goes. And, in a wild NFL offseason, could it be possible that the future Hall of Famer and the iconic organization actually part ways? It’d be insane to think about, but it could just happen. Seriously, that’s how dysfunctional things are at the moment between both sides.

Making matters worse is this: A report that Aaron Rodgers allegedly wants the Packers GM, Brian Gutekunst, fired. That’s according to Yahoo! Sports’ Charles Robinson, who wrote over the weekend that the signal-caller is “adamant” that he won’t return to Green Bay unless Gutekunst is gone. That rumor prompted a question from NBC Sports’ Peter King to Gutekunst himself, asking what his opinion is on the report.

“(You) never want to see those things or read those things,” Gutekunst said. “He’s never said that to me and he never said that publicly … At the same time, I’m a lifelong scout, and we work all year for (the NFL Draft). We couldn’t let this distract us from the task at hand.”

Gutekunst was also asked if he believes the relationship between Rodgers and the Packers is tarnished beyond repair.

“No, I don’t think so at all. That’s my opinion and that’s the organization’s opinion,” Gutekunst said. “We want Aaron to be our quarterback. We’re pretty resolute with that … We want to leave every avenue open for that to happen.”

So why all the alleged combativeness between Rodgers and Brian Gutekunst? Because the quarterback is rumored to want a new deal, which, of course, is the job of the general manager to get done. In essence, the delay means tension between the star player and the front office leader.

Who knows where all of this goes as the rest of the NFL offseason moves along? But with rumors coming out everyday about Aaron Rodgers’ unhappiness with the Green Bay Packers, it makes you wonder if it’ll all end with a separation and the current league MVP forcing his way out of town — especially if Robinson’s report from the weekend is true about the quarterback wanting his GM canned. Remember, this is quite the passive aggressive pro athlete we’re talking about, so would anyone be surprised if Rodgers sits out, hosts Jeopardy! for a few months and waits to see if he ends up getting what he wants later this year? No, probably not.