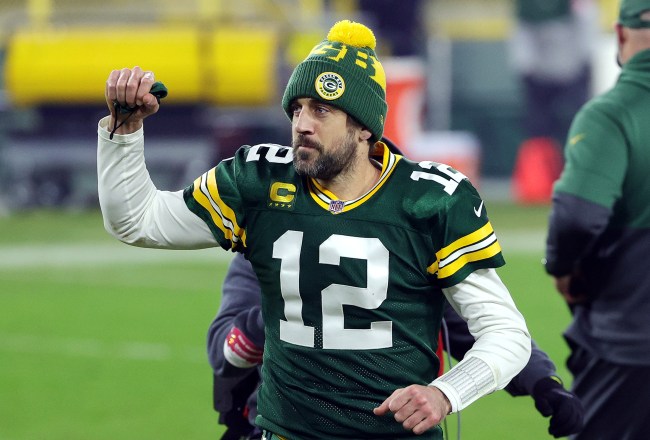 Aaron Rodgers reportedly wants out of Green Bay and the Packers have apparently been unable to change his mind.

According to ESPN’s Adam Schefter, a disgruntled Rodgers told some people within the Packers organization that he did not want to come back to Green Bay.

Schefter went on to add that several members of the Packers front office went to meet Rodgers in California to try and change his mind.

The Packers are aware of his feelings, concerned about them and have had team president Mark Murphy, general manager Brian Gutekunst and head coach Matt LaFleur each fly out on separate trips to meet with Rodgers at various points this offseason, sources told ESPN.

NFL Network’s Ian Rapoport is reporting that Rodgers is unhappy with how his recent contract negotiations with the team went.

Here is my understanding of the Aaron Rodgers situation: Rodgers and the #Packers have been negotiating a long-term contract offer. They’ve been working on it for weeks. Rodgers has been unhappy at times during those moments. No deal is done, and he’s not happy now. https://t.co/JkwoIriwIF

Over the last month, Aaron Rodgers had his agent Dave Dunn fly out to Green Bay for several days of meetings to work through the situation. Rodgers refused a restructure. Wanted an extension. Teams called knowing he wasn’t happy. GB rebuffed them. Offered an extension. No deal.

Have reported extensively for months about Aaron Rodgers mounting displeasure with the Packers organization and unrest about his future there as they refuse to rework his deal and seem content to rent him year to year while they develop his replacement. As reported numerous …

In numerous ways, including by playing the retirement card. Those calls will only continue. As reported in the past, his words since post-game press confetence and since sent a strong signal to the market, read by other GMs as: Come get me. Several have tried. More will follow

On Thursday afternoon it was reported that the 49ers had made a trade offer for Rodgers but were quickly shut down.

The #Packers remain committed to Aaron Rodgers. @TomPelissero said there is “zero” chance of trading him. It’s all about getting an extension done… and if that happens, this should take care of the matter (until next time). https://t.co/Lv56tHCC6M

As we’ve stated since the season ended, we are committed to Aaron in 2021 and beyond,” Gutekunst told ESPN. “Aaron has been a vital part of our success and we look forward to competing for another championship with him leading our team.”

The San Francisco 49ers called the Packers on Wednesday night, a source told ESPN, and the Los Angeles Rams inquired about Rodgers in January before they traded for Matthew Stafford.