NFL Fans Call B.S. On Aaron Rodgers After He Said He Was ‘Disappointed’ That News Leaked Of His Rift With Packers While At The Kentucky Derby 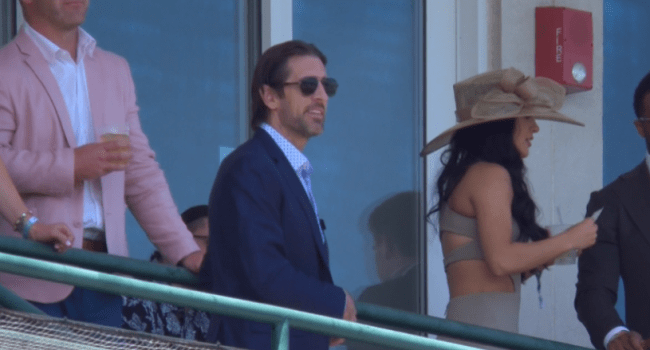 Aaron Rodgers made his way to the Kentucky Derby on Saturday and he’s apparently trying to absolve himself from all the public drama that has unfolded between him and the Packers but fans aren’t buying it.

Earlier this week immediately before the start of the NFL draft, someone leaked to the media that Rodgers wanted out of Green Bay.

It has since been revealed that Rodgers is currently beefing with Packers GM Brian Gutekunst because he’s still mad at the team for drafting Jordan Love.

While at Churchill Downs for the Derby, Rodgers gave Mike Tirico a brief off-camera interview in which he said he was “disappointed that news has come out of this rift with the Packers.”

Aaron Rodgers at the Kentucky Derby. He declined to talk to NBC. Mike Tirico says Rodgers told him he was "disappointed that news has come out of this rift with the Packers." Tirico says Rodgers expressed how much he loves Green Bay.#AaronRodgers #Packers pic.twitter.com/BOM3p8LzFQ

NFL fans immediately called B.S. on Rodgers because many believe it was his team leaking all the info to the media.

Leaking the news and then walking away from it is the classic athlete move. That said, Aaron Rodgers could have confirmed the reports and didn't, so he didn't close the door on a return to the Packers. https://t.co/PCBsj5dEQw

This is unconscionably crass and Packers fans who fall for it should just get “rube” tattooed on their foreheads https://t.co/zhS6W7zBEx

Lmaoo acting like it wasn’t his agent leaking stuff

“I’m disappointed my agent leaked the news of my resentment towards the Packers front office. I in no way knew about the leak and do not endorse it. I’m just SHOCKED this news came out this weekend.” Aaron Rodgers, probably. 🙄🙄 https://t.co/s79MHw4uss