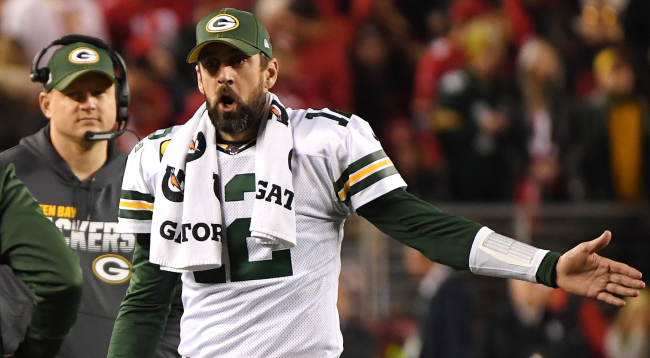 It seemed like every NFL team had made some sort of offer to Green Bay in an effort to land the future 37-year-old Hall of Famer.

The 49ers gave it a shot. Denver was rumored to be on the verge of a deal. The Los Angeles Rams reportedly asked about the Packers QB before trading for Matthew Stafford. Rodgers reportedly also listed the Raiders as a potential landing spot.

All of the talk was for naught, however, as Packers general manager Brian Gutekunst says there’s no way he’s trading Shailene Woodley’s boyfriend.

“I do think he’ll play for us again,” Gutekunst told the media after day one of the 2021 NFL Draft came to an end.

Trading Rodgers would also mean the Packers would have to take around a $38 million salary cap charge, so that’s a problem.

“The value that he adds to our football is really immeasurable, you know what I mean?” Gutekunst contined. “He brings so much to the table not only as a player but as a leader.”

On Friday, the Washington Post reported that a source close to the situation said Rodgers told Packers officials that, despite what Gutekunst says, it’s possible that the three-time NFL MVP won’t play for the Packers this coming season.

Rodgers is currently heading into year two of a four-year, $134 million contract extension with Green Bay.