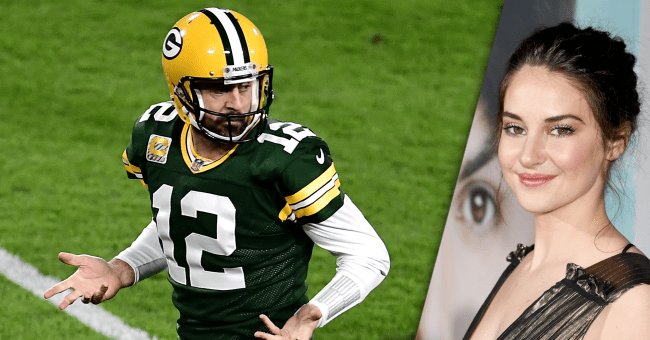 It has only been a week since we warned everyone how terrified we were after seeing Shailene Woodley’s first Instagram post with her fiance Aaron Rodgers.

We were very concerned that Rodgers and Woodley (Rodley? Woodgers?) were on their way to becoming absolutely insufferable, and with good reason.

Rodgers always seems to awkwardly go out of his way to prove to everyone just how much he is into whoever his current girlfriend is – something he has already done with Woodley.

It makes him look like a bit of a try-hard (Look! I have a cool girlfriend!), or at the very least, socially awkward and completely un-self aware. (As for that last possibility, people do call him A-Rod for short. Coincidence?)

A perfect example of this showed up on the internet this week in the form of a little Q&A sesh that Rodgers and Woodley took part in for something called the Walt Disney World Minute.

The couple has been on vacation at the happiest place on Earth so I guess the Disney folk wanted to take advantage.

When asked about the ways they like to unwind, Woodley replied, “I like a bath, maybe a good glass of wine.”

Rodgers then interjected, “I was going to say cuddle time, but since she went with her own thing, I’m going to say Jeopardy! and a glass of scotch.”

Bruh… Somehow it gets even worse.

When asked by the interviewer what makes them smile, guess what they each replied?

“This guy,” answered Woodley as the two of them pointed at one another.

Considering Rodgers’ past history with women this GIF seems the most appropriate.

Check out Rodgley’s full Disney Minute video below, if you dare. Barf bag optional. (Yes, I am going with Rodgley, for now.)