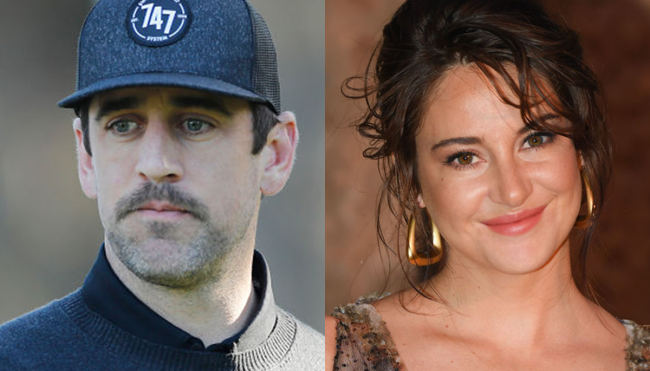 Part of me feels like Jeopardy! should’ve just packed it in after Alex Trebek passed away following his battle with pancreatic cancer last year, as there’s really no use in attempting to find someone who will ever be able to measure up the television icon who was essentially the Mr. Rogers of game shows.

I can understand why the show decided to push forward by having some big names temporarily take his place behind the podium, and while I still can’t understand why Dr. Oz was one of the people who was tapped, I do see why Aaron Rodgers got the nod after tuning in on Monday night to see him step into the role of host after trading his Packers uniform for a sharp suit and a tie with some serious “1960s Sitcom Living Room” vibes.

However, that was actually the second debut of what was a momentous Monday for Aaron Rodgers, as prior to the airing of the episode, the quarterback made his first appearance on a slightly less hallowed vehicle: Shailene Woodley‘s Instagram.

Following his high-profile split with Danica Patrick last year, Rodgers did what he could to keep his personal life personal, but in February, the kind of people who live vicariously through celebrity relationships got a new conduit after he confirmed the rumors he’d been quietly dating Woodley by announcing the two of them had gotten engaged while accepting his MVP award.

Anyone hoping for some juicy tidbits concerning the new item has been largely forced to rely upon information that’s been revealed by the ever-reliable “Sources Close To The Couple,” as they decided to keep things relatively private after making things public. However, everyone knows that in this day and age, you’re not officially together until a post of the two of you together pops up on social media, which we were finally treated to when Woodley hyped up her man’s Jeopardy! debut on Instagram Live while driving with Rodgers and a Very Good German Shepard.

After it aired, Rodgers also hopped on Instagram to post a lengthy video where his fiancée played the role of the host while he answered a variety of questions about the show and life in general, and if you’re not terrified of what’s in store after seeing these clips, you’re obviously not paying attention.

I generally do everything in my power to avoid getting caught up in celebrity relationship drama in order to devote that time to literally anything else. However, I couldn’t stop myself from watching those videos, and based on the deafening volume of the alarms they set off, I can’t sit here in good conscience when it’s evident there’s a very good chance an unsuspecting world is about to be blindsided by levels of insufferability it may not be prepared for.

As much as I would love to stay out of the fray, Rodgers and Woodley have given me no choice by going public in the manner that they did. If they’d simply thrown up a picture of the two of them together with a cheesy caption, I could’ve just said “Oh” and then kept on living my life. Sadly, by coming out of a gate with a video where Woodley lets everyone know she’s riding along with her “super sexy, super attractive” loverboy, they’ve all but announced their plans to approach things like a couple of teenagers who spend their days reminding the internet how madly in love they are instead of, you know, just sending a text and sparing the rest of us.

This is a particularly bizarre development when you realize Rodgers is notorious for keeping details concerning his personal life pretty close to the chest, so his decision to start having those things broadcasted for the world to see is a fairly baffling pivot. In doing so, he’s all but asking the tabloids to pick apart every picture and give any video they’re in the Zapruder Film Treatment, which will have an inevitable trickle-down effect that will make it virtually impossible to avoid any drama that makes headlines as a result.

I have no idea if Woodley is the person who’s really responsible for his sudden change in policy, but I can’t help but think we could have another Jay Cutler Problem on our hands based on the evidence that’s surfaced so far. Despite being the true star of Very Cavallari, it was incredibly obvious Cutler never really wanted to have his life documented on his ex-wife’s reality television show, which made the news of their divorce one of the least surprising developments in the world. While Rodgers is a bit more outgoing (and infinitely better at football,) I can’t help but think he’s setting himself up to befall the same fate.

It’s not too late for Rodgers and Woodley to realize the error of their ways, but until I see signs they’ve thought better of their current strategy, I’m bracing myself for the worst (and preemptively muting tweets that mention both of their names until further notice.) Don’t say I didn’t try to warn you.

UPDATE: I TOLD YOU THIS STORM WAS COMING!

May God have mercy on us all.