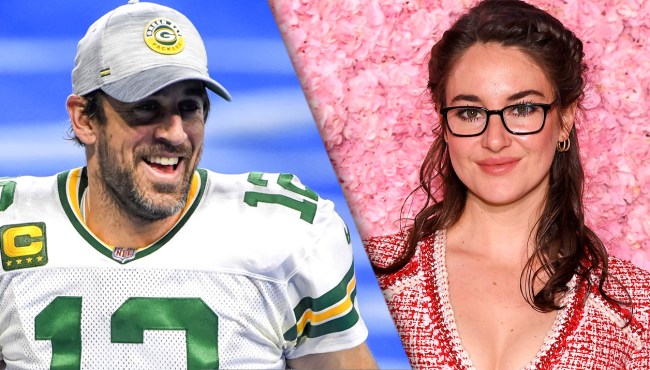 It has been well chronicled over the past few years how strained the relationship has been between Green Bay Packers quarterback Aaron Rodgers and his family.

Perhaps the most famous dust-up that occurred between Rodgers and his family occured back in 2018 when, on Thanksgiving eve, Aaron’s brother Jordan blasted the QB on social media for urging his Twitter followers to help donate money and spread awareness for California wildfire victims, but never checking in on his own parents to see if they’re safe.

Another time, Rodgers reportedly didn’t even attend his grandfather’s funeral due to all the animosity between him and his family.

The peak of all of the Rodgers family drama seemed to take place back when the 2020 NFL MVP was dating actress Olivia Munn. Rodgers’ family reportedly didn’t like her, which made him furious, and he ended up choosing Munn over them.

Fast forward to 2021 and Rodgers is now engaged to another actress, Shailene Woodley, and he supposedly is in no hurry to introduce her to mom and pop.

Aaron Rodgers looked positively giddy when he revealed he had a fiancée, Big Little Lies star Shailene Woodley, at the NFL Honors on February 6. But according to an OK! source, the QB is dreading the next step: bringing her home to meet his parents.

“It’s no secret that Aaron’s been estranged from them for years. The last thing he wants is for Shailene to get caught up in the drama,” says the source, adding that the actress, 29, is encouraging the athlete, 37, to let bygones be bygones. “She wants Aaron to clear the air with his folks, but he’s not ready to do that, and he doesn’t want to bring Shailene into a toxic environment.”

Interestingly, Woodley, who confirmed her engagement to Rodgers on The Tonight Show, says she knows very little about football, claiming she has never even been to a game and before dating Rodgers hadn’t even watched one.

Rugby, on the other hand… she knows how that works.