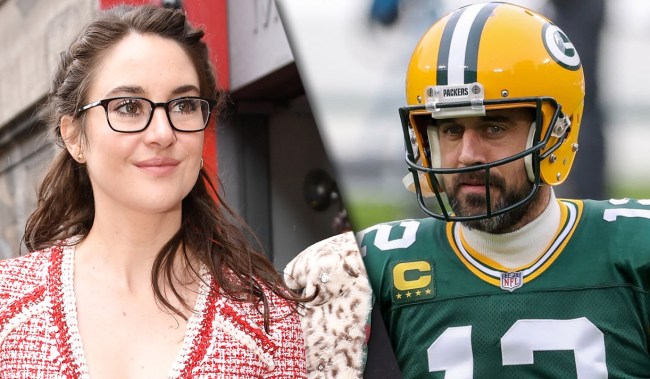 Divergent star Shailene Woodley confirmed to Jimmy Fallon on The Tonight Show on Monday that she’s been engaged to Green Bay Packers quarterback Aaron Rodgers, who she called a nerd, for “awhile” now.

Woodley, who appeared on the show to promote her upcoming film The Mauritanian, told Fallon that she and Rodgers met during the pandemic, and doesn’t get why her being engaged to him is causing so much drama. (Rodgers and Danica Patrick only broke up around six months prior to the news that he was engaged to Woodley.)

Related: New Report Claims To Reveal Why Aaron Rodgers Was So Ready To Get Engaged To Shailene Woodley

“For us it’s not new news. So it’s kind of funny. Everybody right now is freaking out over it and we’re like, ‘Yeah, we’ve been engaged for awhile,’” said Woodley.

“He can throw fast balls, he can throw slow balls high balls, low balls,” she continued.

Fallon then asked her if she’s spent much time in Green Bay and if she is a football fan.

She claims she has never been to a football game, including this past season because of the pandemic, and before she met Rodgers she hadn’t even watched a game on TV.

“When we met, I knew he was a football guy but I didn’t know what kind of a football guy he was,” said Woodley. “I am still constantly learning. I don’t get it. He’s good. He’s great. But, like, I don’t understand. Because I don’t know him as the football guy! I know him as like, the nerd who wants to host Jeopardy! That’s the dude I know. He just happens to also be very good at sports.”

Woodley stars in The Mauritanian alongside Jodie Foster, another big fan of Aaron Rodgers, which will be released in theaters and on demand on March 2.