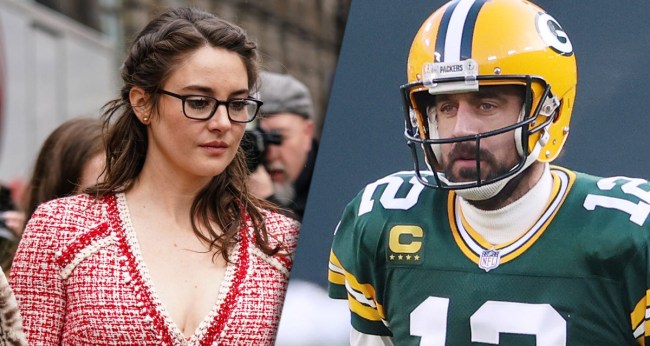 A new report claims to reveal why 2020 NFL MVP Aaron Rodgers, fresh off a relationship with Danica Patrick, was so ready to get engaged to actress Shailene Woodley.

Right around the time the Green Bay Packers quarterback and the IndyCar star announced they had broken up, rumors surfaced that the split was caused, at least in part, by Rodgers hooking up with Woodley after the two had reportedly been introduced to one another by Patrick.

The rumors of Rodgers and Woodley pairing up were all but confirmed at the beginning of February with a source telling E! News, “They have kept things private and low key.”

Then, in a move that shocked just about everyone watching, Rodgers announced that he is engaged while accepting the MVP Award, referring to his fiance during his speech.

On Wednesday, E! News published a new story about the couple entitled, “How Shailene Woodley and Aaron Rodgers Fell So Hard, So Fast.”

“…for those close to the athlete and his bride-to-be Shailene Woodley, an engagement seemed like the only logical play after months of dating. Instantly smitten, “they had a very intense connection from the beginning,” an insider noted to E! News. “It’s a quick engagement, but for those that know them, it didn’t come as a surprise.”

Introduced over the summer, “they both knew early on that it was something special and different from what they had experienced in other relationships,” the insider said of Rodgers and the Big Little Lies star.

He initially told pals they were just feeling each other out, a source close to the athlete told People, but it was clear they were progressing at a brisk clip. “It was so fast that at first, we thought she was just a rebound,” admitted the source. “Everyone thought it was a casual thing because that’s what he was telling everyone, even when it was clearly not a casual thing.”

By the time he confessed to pals that he’d actually proposed to the Los Angeles-bred actress, few were left stunned. As one source put it to People, “When you know, you know, right?”

E! News also made a point that should probably scare Rodgers a little bit, recalling the time Woodley told InStyle, “I fall in love constantly!”

We’ll find out just how much in love she is with Rodgers when Packers fans come for her the first time the QB has a bad game and costs the team a win next season. Because it will happen. It always happens.