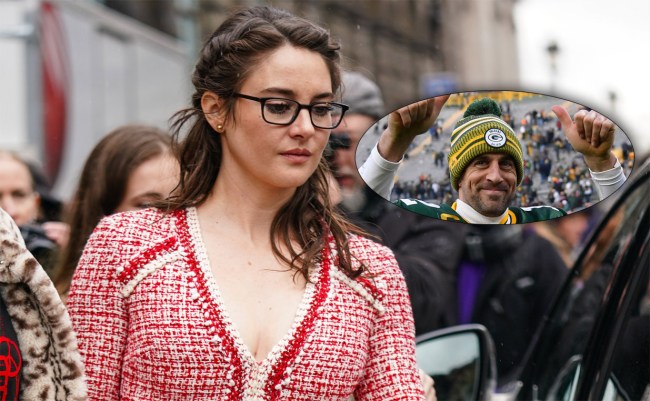 Remember the rumor that was floating around back in July that claimed Aaron Rodgers and Danica Patrick broke up because he cheated on her with actress Shailene Woodley? Turns out that may have actually been true because Rodgers and Woodley have apparently been lowkey dating for quite some time now.

Another rumor that was floated at the time was that Patrick had actually introduced Rodgers to Woodley, who is 10 years her junior. Ouch, babe.

Aaron has been in Green Bay, Wisconsin, to stay “very focused on his season,” which came to an end on Jan. 24 when the Packers lost to Tom Brady’s Tampa Bay Buccaneers in the NFC Championship Game.

Meanwhile, Shailene has been working on-set in Montreal to film Misanthrope, according to Canada Live. The crime movie is directed by Damián Szifron.

“They have seen each other and been in touch,” the insider tells us. “They continue to talk and see each other when they can. They are both focused on their careers but they also make time for each other.”

Woodley, 29, was spotted in Green Bay back in October, giving even more credence to the report of her coupling up with Rodgers, 37.

Back in September, Rodgers revealed how happy he was with his life on The Pat McAfee Show, subtly sideswiping Danica in the process.

“I have just a new and increased love of life,” said Rodgers. “And I’ve made decisions and changes and habits that put me in a lot better head space and there’s just a lot of things that have come together in my life over the last few months that have really been enjoyable and reminded me, given me perspective, on life and in football to view things through the most positive lens I possibly can.

“And that’s why I’m having so much fun and it starts with love. And then surrounding yourself with people that you really enjoy.”

Apparently one of those people he really enjoys is Shailene Woodley.