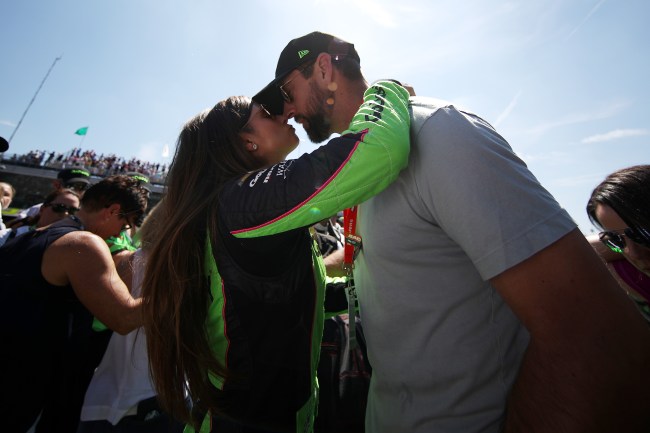 Is there anyone who loathes commitment more than Aaron Rodgers? The dude couldn’t even commit to his own family.

The 36-year-old had me convinced he was ready to change his ways with NASCAR driver Danica Patrick, but alas, after internet detectives discovered Danica unfollowed Rodgers on social media, it’s been confirmed that they too are dead.

Danica Patrick and Aaron Rodgers are going their separate ways after dating for over two years.

Danica’s rep confirms to E! News that she and the Packers star are “no longer together.”

Rumors of Danica and Aaron’s breakup began to swirl last weekend, when fans of the couple noticed that the former professional driver was not present to support her boo at the American Century Championship, where the footballer was participating in a celebrity golf tournament. And upon further investigation it seems the star is no longer following her beau on Instagram and deleted a few posts with the athlete on her feed, as well, with the last post featuring Aaron being from April 11.

Aaron Rodgers & Danica Patrick have officially split after over 2 years together. 💔 https://t.co/CrqmlrXxUa pic.twitter.com/UngrgxJjhH

A consensual breakup is one thing, but the Instagram unfollow and post deletion makes me believe something insidious has creeped into their relationship.

“It seemed like Aaron had found his perfect partner in Danica Patrick. Danica had no idea when she introduced actress Shailene Woodley to Aaron that Shailene would make a play for him. Shailene and Aaron were quite cosy this past weekend in Tahoe (American Century Championship). Looks like Aaron traded to a much younger girlfriend. Danica is devastated by Aaron’s betrayal.”

The 28-year-old Woodley, who is a decade younger than Patrick, made her film debut in 2011 with The Descendants and has become a household name with The Divergent Series and Big Little Lies.

@vanityfairitalia (this is for you laura b). (you know who you are). (pour me another gin). (i love you). thanks @tyronmachhausen

honestly , @dior , you just fucking get me. #BLL2 (also, my arches are out of their minds).

While the relationship between Rodgers and Woodley is just speculation at this point, I can totally see these two having a fling that flames out in 6-8 months. Love always loses.