Aaron Rodgers Talked About His Relationship With Danica Patrick: ‘We’re Really Attracted To Each Other’ 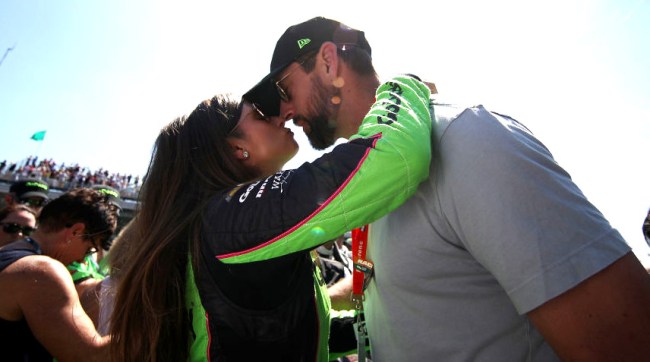 You know how I know Aaron Rodgers and Danica Patrick have a great relationship? Because at no point so far this year have Packers fans claimed that she’s “cursed” their quarterback.

Not that their relationship hasn’t had its awkward moments. Actually, that’s pretty much ALL it’s had. One awkward moment after another.

Not that Rodgers has contributed to that by doing much talking about his relationship with the former NASCAR and IndyCar driver. In fact, he’s hardly said a word. Until now…

Earlier this month, Rodgers sat down with Michele Tafoya for Artful Living and actually spilled his guts a little bit about the relationship.

And guess what? It was awkward.

Whoa… he used the “L” word. Are we going to be seeing a little Aaron or Danica running around soon?

He also talked about how much they like traveling together, what he thought of Patrick’s stint as ESPYs host, and her family cheering against him because they’re Chicago Bears fans, “They can’t come to the games if they’re doing that.”

We really enjoy traveling. She went on the trip to India and Africa, and we had a blast. And we’ve taken some trips domestically that have been fun. I’m a little further out there in my love for history; I want to go to historical sites around the world. She’s getting into it as well, but she’s spontaneous. She’s up for anything travel-wise, which is fun. She’s a good travel partner because she’s so laid-back and low-maintenance. And she’s a hell of a cook, so we love just staying in, too. She eats really healthy. She’s inspired me in that way.

Yeah, and I bet he swept her off her feet with that suave southern accent he developed growing up in Chico, California.