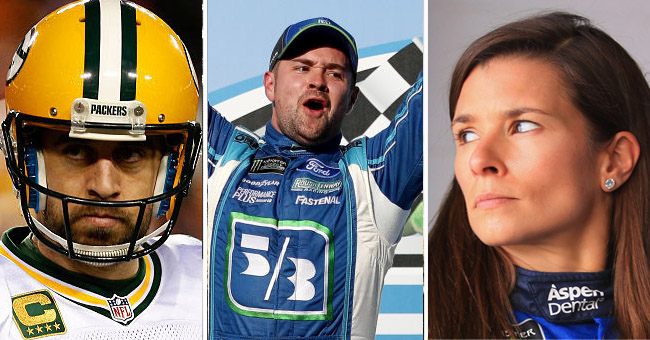 Who would have ever guessed that Danica Patrick and her fellow NASCAR racing boyfriend Ricky Stenhouse, Jr. breaking up would be more entertaining than when they were together? Yet here we are with the 2018 Daytona 500 looming on February 18th as one of Danica’s final two races of her career and things are starting to get interesting.

Last week, Patrick appeared on the Fox Business Network to talk about racing, her retirement, her reuniting with GoDaddy, her new book, etc. when anchor Cheryl Casone decided to throw caution to the wind and brought up Patrick’s new boyfriend Aaron Rodgers. It was gloriously awkward.

However, Patrick’s ex-boyfriend Stenhouse, while being interviewed on the NASCAR Media Tour to promote the upcoming season, topped Danica for cringe-inducing moments when he was asked if he had a comment about Patrick now dating Rodgers.

Luckily, for us, the reporters didn’t give up there. They followed up by asking if now that they were broken up if he was going to race Patrick any differently in the Daytona 500, the first part of the “Danica Double” retirement tour which concludes at this year’s Indianapolis 500.

“I don’t think I’ll race any differently,” replied Stenhouse. “I try to respect everybody around me, especially at speedway races. You don’t want to put somebody in a bad spot because you’ll put everybody in a bad spot. I’ll go out and race just like I’m racing everybody else and see how it plays out.

“Heck, when we first started racing we got in crashes anyway,” he added with a laugh. “So it is what it is. I’ll just go compete as hard as I can. I plan on putting myself in position to win the race.”

Stenhouse even admitted, that should the situation present itself (and helps him), he would even work with her on the track during the race.

“If it helps me, I’ll help (her) – kind of the same way I do everybody else out there,” Stenhouse revealed. “I think if I can help and it’s going to benefit myself, then I will. I try not to help people if it’s only going to benefit them on the race track.”

Continuing to say all the right things, Stenhouse also commented on the unique way Danica is ending her career.

“Like I’ve always said, I think it’s a cool way to retire,” he said. “For somebody who’s done the Daytona 500, run in NASCAR, run in IndyCar, I think it’ll be cool for (her) to hit the two biggest races of the year.”

Speaking to For The Win on Wednesday, Patrick echoed Stenhouse’s take on the unusual situation of two people racing against each other shortly following a break up after five years in a relationship together…

“I heard his interview, and I agree. If we can help each other – if helping him helps me – so be it. Vice versa. I agree with all that. When we first met, there was already respect there from the very beginning when we were just friends, so I don’t see that changing at all. It’s not going to change for me.”

Something tells me the ratings for this year’s Daytona 500 might be up a tick from last year. Just a hunch.