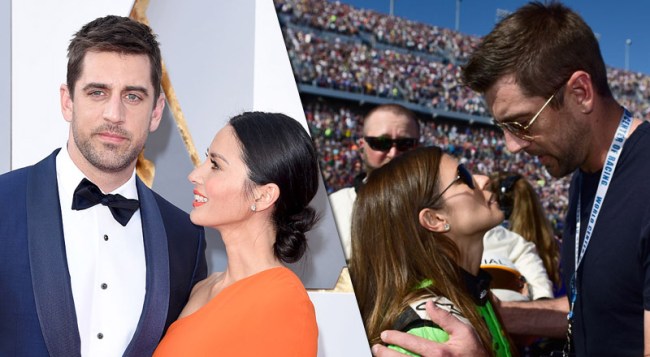 Olivia Munn and Danica Patrick both made appearances on a SiriusXM show this week and go figure, both of them talked about dating Packers quarterback Aaron Rodgers.

According to Munn, Aaron and his family were already at odds months before she began dating him.

She also claims that rather than being an instigator in the rift, she was actually trying to get Rodgers to reconcile with his family.

“On my last day when I was filming The Newsroom, I spent the day in my trailer just encouraging him to, like, have an honest conversation with your parents,” said Munn.

She also believes that Rodgers and his family don’t get along because of jealousy, not that Aaron is without blame.

“There’s a lot of complications. I don’t think either side of the road is clean,” theorized Munn. “It’s not okay when you try to stand on someone’s shoulders and try to throw dirt in their face, which is what I think they did with him.”

Munn and Cohen also spent some time discussing gay athletes and the NFL, for some reason.

As for Aaron Rodgers’ current girlfriend Danica Patrick, she made another stop on her retirement hype tour to hawk some of her new products, I mean talk about racing, on The Jenny McCarthy Show.

Patrick, who will become the first woman to host the ESPYs this summer, spoke to McCarthy on her SiriusXM show about her career, and how she, a lifelong Chicago Bears fan, met Rodgers.

“We met at the ESPYs back in 2012. We both remember meeting each other. It was quick,” Patrick told McCarthy. “But I got his email address. And I remember thinking to myself, ‘Oh, on the down low. Not a phone number, just an email address. Whatever.”

Patrick also revealed that they “refer to each other as ‘Chicago’ and ‘Green Bay.’ It was very cute…like the Capulets and the Montagues.” So cute.

She also told McCarthy that she makes Aaron waffles on Sunday mornings. Do what you will with that piece of information.

And here’s Patrick talking about hosting the ESPYs…