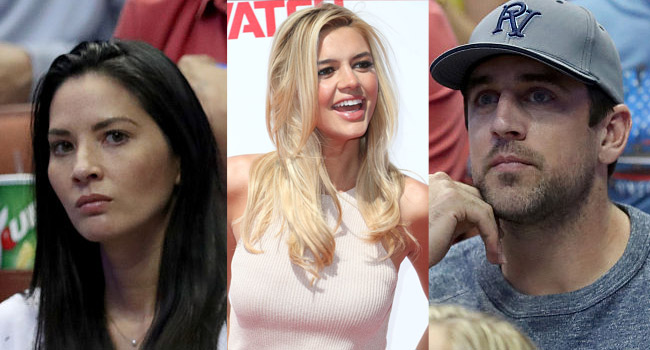 Remember last week when we reported that Aaron Rodgers appears to have rebounded from his breakup with Olivia Munn with SI Swimsuit model and Baywatch star Kelly Rohrbach?

Rohrbach, 27, who was once rumored to have been engaged to Leonardo DiCaprio and has a hell of a golf swing, was spotted on the links with A-Rodg in Los Angeles last weekend.

“Olivia [Munn] is furious after seeing Aaron [Rodgers] out with Kelly [Rohrbach],” an insider told HollywoodLife.com EXCLUSIVELY. “Aaron made it seem like he was in no rush to date anyone else when they split. It was more about the issues they were having — the fighting and him needing space. Now she’s wondering if Aaron wasn’t being completely honest with her and had his eye on Kelly while they were together.”

But wait, it gets even better…

To make matters worse, an insider previously told HollywoodLife.com that Aaron and Kelly already had a little chemistry going on way before Aaron and Olivia split. Apparently the two hit it off at the AT&T Pebble Beach Pro AM back in February. “They had met a couple times before that at different golf events, but sparks were flying high when they spent time together at this year’s tournament,” the source revealed.

Hollywood Life also had this to say in a previous report…

“It was heartbreaking to see Aaron [Rodgers] out with someone so soon after their split; what’s even worse is seeing him out with perfect Kelly [Rohrbach],” an insider told HollywoodLife.com EXCLUSIVELY of how Olivia Munn, 36, feels about seeing Aaron, 33, and Kelly, 27, together following their split earlier this month. “Not only is she absolutely gorgeous, but she’s a really cool girl who is also a good athlete. She’s a great match for Aaron which terrifies Olivia. She could see Aaron getting serious with Kelly very quickly and that’s really hard to deal with.”

Hey, at least the rumors that Rodgers might be dating Clay Matthews’ sexy sister aren’t necessarily true now (that we know of).

And really, Munn should only really be worried about Rohrbach if she somehow helps get Rodgers back in the good graces of his family. Which considering the “drastic” lifestyle changes Rodgers has been undergoing lately makes that still seem very unlikely to happen.

Okay, yeah, scratch that. She should definitely be worried.