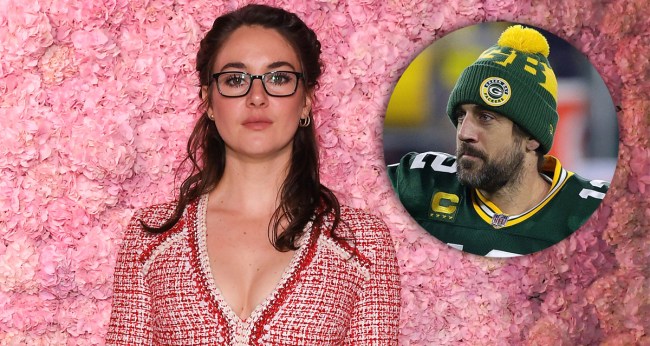 Many NFL fans were very surprised to hear 37-year-old Aaron Rodgers admit to the world at the NFL Honors event that he was engaged.

After all, we only found out that he and former IndyCar driver Danica Patrick broke up around six months prior to this big reveal.

Little did we know that he and actress Shailene Woodley (who was reportedly introduced to the quarterback by Patrick) had been dating on the downlow for months.

Based on reports, it appears Rodgers and Woodley were trying to keep the relationship under the radar so as to not cause any distractions during the football season. (Wise move.)

Related: Report Claims To Reveal Why Aaron Rodgers Was So Ready To Get Engaged To Shailene Woodley

Still, for Rodgers, after dating Olivia Munn for three years and Danica Patrick for two without ever getting engaged, to decide he wanted to marry Woodley after about half a year, this was quick.

A source who spoke to E! News about the couple tried to explain the rush to get married and reveals that Woodley has been spending much of her time of late living with Rodgers in Green Bay.

“They have spent the entire fall together and lived together throughout,” said the source.

Guys, I just talked to @shailenewoodley

“She is very supportive of his career and embraced his life in Green Bay. Even though she has her own career and life, she wanted to be there with him. Over the next year, they plan to spend some time traveling and enjoying a warmer climate.”

This source also added, “They can’t wait to get married and they want it to happen soon.”

With his season wrapped, he has returned the favor, spending the past couple weeks in Canada so that he could celebrate Valentine’s Day with his fiancée. “He was quarantined at her place, but they spent time together when she wasn’t on set,” a source shared. And with temps hovering in the teens, “They had no problem staying in, ordering food and not going anywhere.”

That laid-back vibe and continued stay-at-home orders are the reason the two were able to keep their romance under wraps for so long. But now that it’s out there, Woodley could become subject to chatter of the so-called girlfriend curse, in which a woman is blamed when her grown man of a partner fails to perform up to fans’ exacting standards.

Fortunately, she’s made it clear she doesn’t give AF what strangers might have to say. “I’ve come to realize it’s really none of our business what other people think about us,” she explained to InStyle, “and the more time and energy we spend obsessing about that, the more we’re trying to be a certain way for other people instead of ourselves.”

Aaron Rodgers Was Spotted On The Set Of Fiancée’s Shailene Woodley Moviehttps://t.co/kq3stTPZ4B

Oh yeah… this is going to be fun.