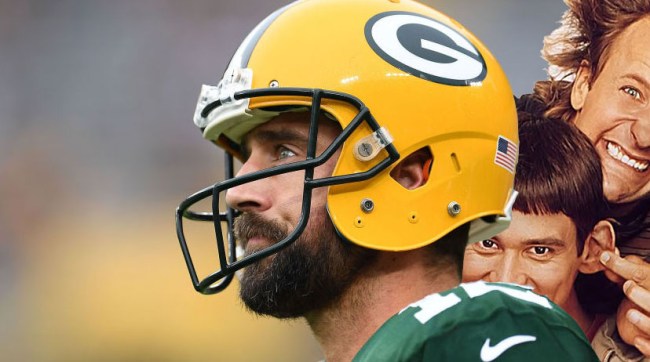 Danica Patrick’s fake relationship with Aaron Rodgers has been one of the more entertaining, cringe-inducing stories in the wacky world of sports this year.

The unusual pairing of the former race car driver and the Green Bay Packers quarterback has been one of the more awkward spectacles we’ve witnessed in some time.

Like when he told Michelle Tafoya in a recent interview for Artful Living, “We’re just two people who enjoy being around each other and love each other. We’re really into each other. So there are going to be posts with each other because we enjoy each other’s company a lot. We’re really attracted to each other.” He’s just awkward AF when it comes to relationships.

Not that Danica has done much to help him out.

After delivering one of her patented motivational speeches in Fargo, North Dakota on Wednesday, Patrick did a little Q&A for those in attendance.

One of the questions pout forth asked what the first line was that Rodgers used to get her to go on a date with him?

“He was at the bar, puttin’ out the vibe, Dumb and Dumber, you know?” revealed Danica. “And, I remember he was doing movie lines! And, people that love movie lines, LOVE movie lines. So, I think we had a dialogue in movie lines, and I was like, ‘This guy is really funny!'”

This apparently happened backstage at the 2012 ESPYs, meaning it took place at some point during her transition from being married and dating fellow NASCAR driver Ricky Stenhouse, Jr.

So it didn’t actually land Rodgers a date, but it did set him up for a relationship with her down the road.

Skip ahead to around the 32-minute mark for the first discussion about Patrick’s boyfriend, then roll on up to the 38-mark for the pickup line discussion.