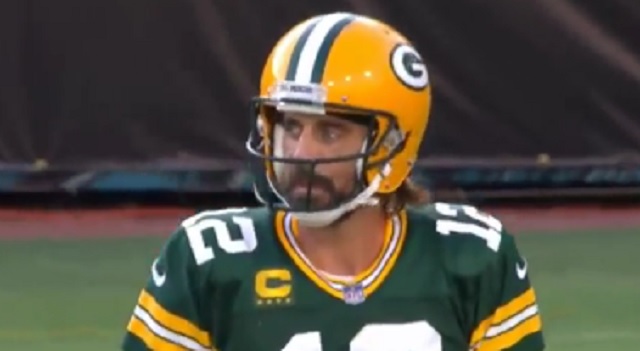 Is Aaron Rodgers playing poorly on purpose to get himself traded? That’s what many fans believe after the reigning NFL MVP had one of the worst game of his career.

Rodgers could have thrown the ball on the ground 28 times in a row and would have had a better QB rating than what he ended up with during the Packers’ blowout loss to the Saints on Sunday.

If Rodgers instead threw all of those 28 passes into the ground, he'd have finished with a higher QB rating of 39.58 🤯 pic.twitter.com/7yFJjopTOi

Considering Rodgers’ asked to be traded during the offseason, a large number of fans believe the QB may have played poorly on purpose to get himself traded.

Conspiracy theory:@Packers did what Rodgers wanted this off-season and through preseason to make it obvious he shouldn't be listened to on such things. Look bad now, including Rodgers.

Rodgers playing bad on purpose to get traded?

Conspiracy theory: Aaron Rodgers is tanking himself to force Green Bay to trade him. https://t.co/wlTUeySddR

Aaron Rodgers is sabotaging GreenBay on purpose and like any rational person is trying to find anyway possible out of Wisconsin pic.twitter.com/1zFZAhlvjy