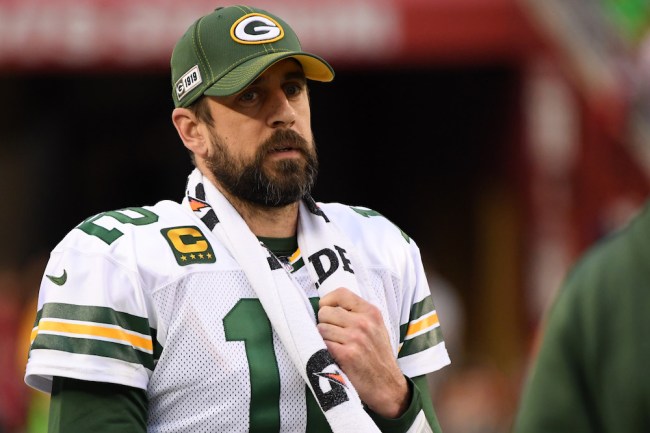 Like death and taxes, the Aaron Rodgers-Green Bay Packers drama continues to be one of those things that is certain in life, with the reigning league MVP refusing to budge from his trade request that began earlier this NFL offseason. With the team standing its ground as well — and only making things worse each time somebody from the franchise is asked about the situation — there’s no telling how long this awkward staring contest could go on.

One thing we do know? Rodgers isn’t showing up to the Packers facility anytime soon. And with whispers about the quarterback willing to sit out and/or retire altogether should he not get his wish, it’s time for the organization to figure out a proper course of action as it transitions to Jordan Love under center.

Knowing what we do, it shouldn’t come as a surprise to hear Jay Glazer urging teams to continue to call the Packers about acquiring Rodgers. In fact, the longtime NFL insider joined Pat McAfee on Wednesday to remind franchises that a future Hall of Famer is available and that discussions about a deal need to continue to happen.

"Every time somebody called the #Packers it was immediately shut down. What these teams need to do is continue to call, continue to call" #PatMcAfeeShowLIVE pic.twitter.com/ysMH9UgzoH

Glazer speaks the truth here, and, whether this was a maneuver by Aaron Rodgers and his people to generate more interest from teams or not, it’s something general managers need to make note of. Like, how hasn’t there been legitimate offers for the quarterback thus far — well, ones that the public has heard about. This is one of the best passers in league history and, even at age 38, proved last season that he’s still a top-3 quarterback in the league.

While some have expressed enthusiasm and optimism about Rodgers and the Packers making up and working things out at some point this NFL offseason, Glazer suggests otherwise. Most people probably think this whole drama will, eventually, be something about nothing. But are we sure? Nope. That’s why teams need to continue to be active and aggressive in their pursuit of the quarterback prior to training camps opening.

My gut tells me Rodgers will either sit out the season or give in and return to Green Bay at some point this NFL offseason. It’s still June, so there’s time for fences to be mended. But don’t discount how passive aggressive the guy is, and how he seems to be more than willing to stand his ground to push for a trade and play elsewhere this upcoming season. The soap opera continues.