The Packers Are Reportedly Calling Aaron Rodgers’ Bluff, Which Seems Like A Dangerous Game Of Chicken 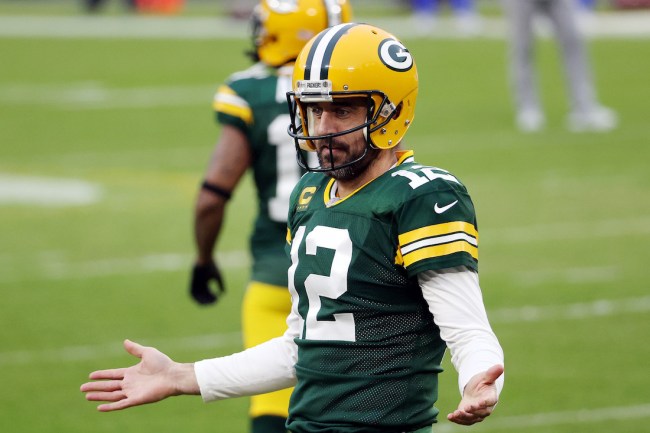 The Aaron Rodgers-Green Bay Packers saga continues to roll along, with the future Hall of Fame quarterback still claiming he’s disinterested in remaining with the franchise. In a wild NFL offseason, it seems like this story continues to get crazier and crazier, as the superstar is unhappy about a number of different “philosophical” things related to the organization, and has pushed for the team to fire its current general manager, Brian Gutekunst.

Although the quarterback is under contract for the next few seasons — and an extension has reportedly been a sticky subject between the two sides — there are rumors that Rodgers could legit retire and go do something like hosting the TV show Jeopardy!, which seems insane. Or he could sit out and forfeit millions. Or he could just swallow his pride and return to the Packers. Nobody really knows what’s going to happen.

While there’s uncertainty surrounding the entire situation, Gutekunst and the Packers have a clear strategy: They’re planning to call Aaron Rodgers’ bluff.

That’s right, the iconic franchise is believed to be playing a dangerous game of chicken with its superstar, with Matt Schneidman of The Athletic reporting on Monday that the team “will not” trade the disgruntled player. That’s the current stance from Gutekunst, and it’s pretty damn risky.

Still, former Packers wideout Greg Jennings believes it’s the smart move by the team, giving his opinion on the matter during a recent appearance on FOX Sports’ First Things First.

"If you are Brian Gutekunst and the Green Bay Packers you have to call Aaron Rodgers' bluff. You have to hold on to him and the only jersey you see him in next season, if he decides to play, is a Packers uniform." — @GregJennings pic.twitter.com/viWlVxUjGN

If the Packers think this is the best move, it sure is ballsy. Not only has Aaron Rodgers publicly slammed the franchise, but he’s kind of humiliated it as well. He’s dogged the leadership. He’s belittled Brian Gutekunst. He’s shown no interest in caring about the future of the team, and, instead, is more preoccupied with his own dilemma.

As athletes gain more power and leverage — even those under contract like Rodgers — teams are forced to make bold decisions. This is clearly one of them by the Packers. But if it pays off and Rodgers shows up to Training Camp with a chip on his shoulder coming off of an MVP season, the dysfunction of this NFL offseason between both sides could actually be beneficial.

Rodgers is as close to a prima donna as it gets in the NFL, and he often shows his passive aggressiveness in order to get what he wants. This could be one of those moments, and it could be a time where he’s just trying to push the buttons of everyone within the Green Bay Packers’ organization in order to get a little more control. The Packers are betting on that.

But going head-to-head with Aaron Rodgers is a tricky proposition, so Green Bay’s strategy could backfire if they’re not careful. For now, however, it appears as if they plan on seeing their star quarterback back in the team facility sooner rather than later.