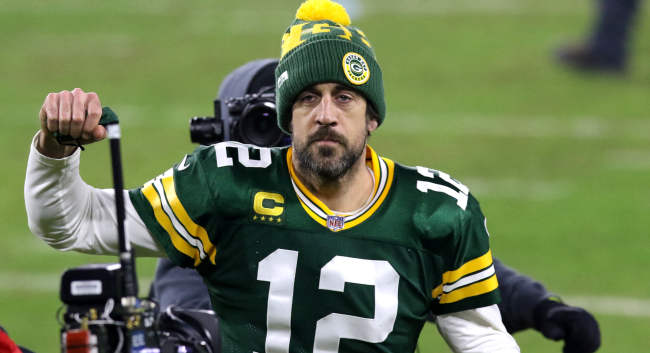 When Green Bay Packers players reported for work on Monday for voluntary OTAs the man no one actually expected to be there wasn’t: 2020 NFL MVP Aaron Rodgers.

According to NFL reporter Albert Breer, Rodgers’ absence has nothing to do with his ongoing animosity towards Green Bay, but rather it has to do with the way the NFL is handling the COVID situation as teams attempt to get back to normal for the 2021 season.

“Packers QB Aaron Rodgers and Seahawks QB Russell Wilson aren’t expected to report for Phase III today … but that’s not about their individual situations. Seahawks and Packers players are staying away until agreements can be reached on how OTAs look,” Breer tweeted.

Sure… whatever you say, Mr. Breer.

By not attending OTAs, Rodgers is sacrificing a $500,000 workout bonus in his contract, so he definitely does not want to be there.

Instead, the Packers’ star quarterback has been spending some quality time vacationing in Hawaii with his fiancee Shailene Woodley and his new BFF, actor Miles Teller.

Aaron Rodgers doesn’t look too bothered about the recent dispute with the Packers 😂 pic.twitter.com/uHHm6ld7td

Related: Aaron Rodgers Says His Favorite Thing To Do With Shailene Woodley Is ‘Cuddle Time’

In footage that recently hit the internet, Rodgers, who is never not extra when the camera is recording, can be seen singing, strumming a guitar, dancing, and playing a little grab-butt with his girl Shailene Woodley.

There is no way Rodgers returns to play for the Green Bay Packers at this point, is there?

Maybe we’ll find out tonight as Rodgers will be making an appearance Monday night on Kenny Mayne’s final show on ESPN at 11 p.m. ET. No word yet on what topics will be covered.

Wtf did I just watch?

You'd think they were taping sasquatch with this video quality. pic.twitter.com/1Q137zzNRM