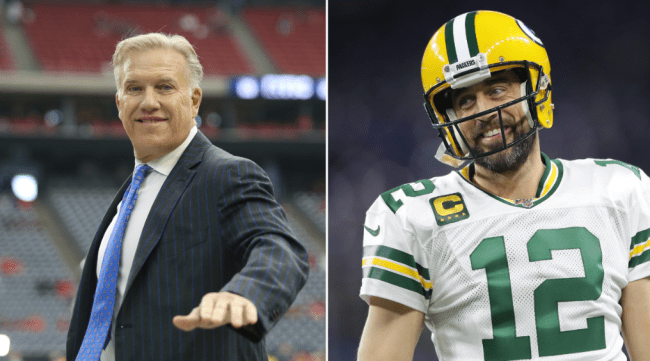 Are the Denver Broncos trying to recruit Aaron Rodgers away from the Green Bay Packers?

Just a few weeks ago, NFL Network’s Rich Eisen had heard that Rodgers would love to play in Denver.

We now have another report saying Rodgers has been in contact with John Elway, who happens to be the president of football operations for the Denver Broncos.

During an appearance on the DNVR podcast CBS Denver’s Romi Bean said she could confirm that Elway and Rodgers both played golf recently in Calfornia amid Rodgers’ turmoil with the Packers.

I know that has happened even though that’s tampering or whatever, but how else does John Elway woo guys but on the golf court.

I actually have this story corroborated on two different sides which is pretty wild.

One is from someone in the golf world who booked the rounds which is verified.

And the other end by chance I had a friend whose friends were playing at this club that weekend and John and Aaron came up and played poker with them, so corroborated on two sides and no one is talking about that.

It is worth noting Bean is fairly well connected within the Broncos organization.

The lady is @Romi_Bean and she is connected to the Broncos organization (former Bronco cheerleader and current reporter for CBS4). So her friends might have a relationship with Elway that would facilitate an invitation to a poker game…

Update: NFL insider Benjamin Allbright reports that Elways/Rodgers bumped into each other and “explained pleasantaries” which would contradict Bean’s report.

Basically Elway and Aaron Rodgers bumped into each other in passing at the same course back in February. Exchanged pleasantries.

Was not a planned thing, was not them "playing together."