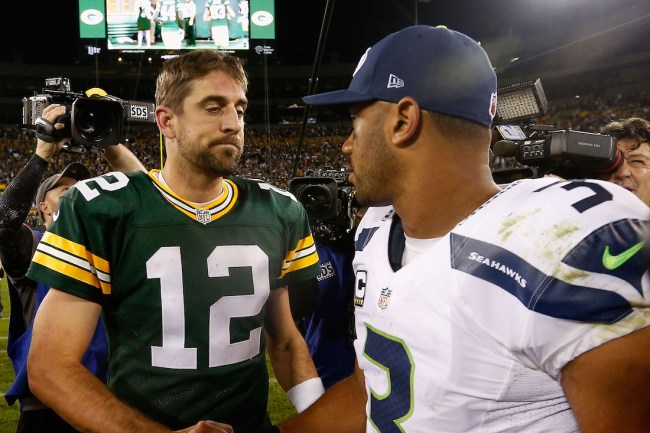 One person who isn’t shy in voicing his opinion on the topic is former Green Bay Packers GM Ron Wolf, who helped guide the organization to a Super Bowl in the mid-90s and is a member of the Pro Football Hall of Fame. In Wolf’s eyes, players like Rodgers and Wilson have become “divas” who are forgetting the fact that they’re still under contract with their respective teams, and that any demands the superstar quarterbacks are making go against the agreement the two agreed to in such deals.

Recently appearing on the Big Show Network, Wolf didn’t hold back in his criticism of players like Aaron Rodgers and Russell Wilson, outwardly complaining about the two trying to take control of their situations by demanding trades and such. Here’s what Ron Wolf had to say.

“All three of these guys have signed long-term contracts and they’re under contract,” Wolf said. “So I’m sure at that time there wasn’t any holding a gun to their head saying you have to sign but now they’re not happy. They’re not happy with the team they signed a contract with.”

He continued: “We have a lot of divas playing in the league right now. I fail to understand that all these guys have long-term deals. I can’t believe the game has changed that remarkably.”

"Today's QB's want to be more than QB's. They're hired to play the position. These guys, they want to pick the coach, pick the players… it's an interesting dilemma."

Do you agree? And if so, do you have a problem with it? pic.twitter.com/pbvXJy0ofJ

To an old school guy like Ron Wolf, demands from players like Aaron Rodgers and Russell Wilson seem absurd. As the former Packers GM stated above, these superstars don’t just want to play football, but they want to control who’s coaching them, playing alongside them and, according to some reports regrading Rodgers, even want to demand a front office exec gets fired to appease him.

Gone are the days when organizations hold most of the power, though, with a new generation of athletes taking more control of their careers. It might not always be the best decision in the long run, but, in the moment, it’s what they feel to be best — despite any criticisms that come their way for doing so.

Who knows what’ll happen between Aaron Rodgers and the Packers or Wilson and the Seahawks, but the two future Hall of Famers feel like they have the power to force their respective teams into doing things they want to make them happy. Such is the life of a superstar athlete, who can influence an entire organization’s decisions.