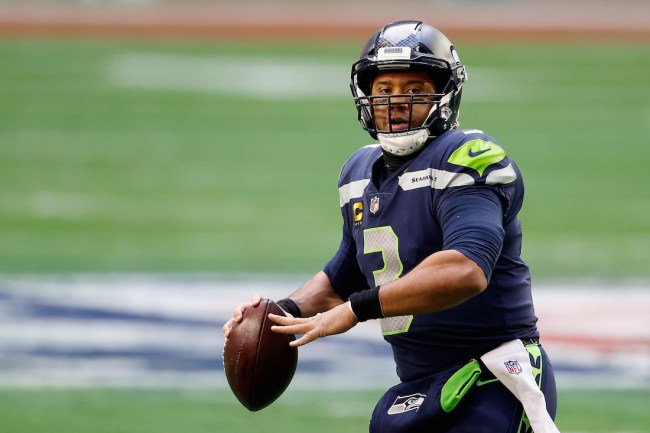 Every single day seems to be a new twist in the Russell Wilson-Seahawks saga, with momentum growing that the perennial MVP candidate could find himself traded at some point either this NFL offseason or next. While the Pro Bowler’s agent tried to play damage control on Thursday by saying his client doesn’t want to leave Seattle — but then listed a handful of teams just to, you know, remind the team of where the guy would want to go if a trade does happen — it just seems like the tension between both sides is at an all-time high.

For those who know anything about Wilson’s career, this probably seem just a little bit… odd. After all, the guy is a future Hall of Famer who has always kept his mouth shut, refusing to bring unnecessary attention onto himself. So this whole situation with the Seahawks definitely raises some questions about what’s going on behind the scenes — especially after the signal-caller inked a massive contract extension just a few years ago.

On the surface, one needs to remember that it’s still only about to be March and things will probably get better. But there’s no guarantee of that happening. Maybe this really is the beginning of the end for Russell Wilson and the Seahawks, and that the relationship is so strained after the quarterback was upset about the team firing offensive coordinator Brian Schottenheimer and, reportedly, refusing to acknowledge some of his ideas to improve the offense last season. The latter issue led Wilson to reportedly storm out of a room with coaches.

One person who thinks that’s the exact case is ESPN’s Jeremy Fowler, who joined Get Up on Friday morning to talk about the drama going on with Russ and the Seahawks. Fowler mentioned that, per high-ranking people he’s spoken with, a Wilson trade is “inevitable” at some point.

“Several high-ranking people I’ve spoken to believe [a Russell Wilson trade] is an inevitability, maybe not this off-season, but next off-season because of the growing tension that isn’t right now, it’s been a couple years,” Fowler said.

“Russell Wilson has grown increasingly frustrated with the lack of personnel input, particularly the investment from the team on the offensive line over the last 8-10 years,” Fowler said. “He’s wanted more of that. He hasn’t gotten it. It’s resulted in some heating up moments internally, with the team and the coaching staff.”

“He’s really throwing a lot of different flavors out there, and that’s by design from what I’m told,” Fowler said. “He wants to give himself a variety of options. This is a short list he’s had for a while in his back pocket.”

"Several high-ranking people I've spoken to believe [a Russell Wilson trade] is an inevitability, maybe not this off-season, but next off-season because of the growing tension that isn't right now, it's been a couple years."

Now, look, Fowler seems to dance around the issue a little bit, first reporting that a Russell Wilson trade is “inevitable,” before throwing in a major caveat that it might not be this NFL offseason, next offseason because of the tension with the Seahawks. What if the two sides repair the dysfunction in the next nine months, once again reach the playoffs and or the Super Bowl and Russ plays at an MVP level? Then would it be “inevitable” that the quarterback would be moved? Definitely not.

Bottom line is this: When it comes to the ongoing Russell Wilson-Seahwaks saga, nobody has a clue about what might happen. We’ve already seen a wild NFL offseason to this point, and, while Russ seemingly falls under the “untouchable” category, maybe Seattle gets an offer that blows them away and they just can’t refuse. Even then, it’s hard to imagine a divorce happening this offseason.

This seems like a classic case of pent up frustration just spilling over, and, once the team reconvenes for minicamps, both Wilson and the Seahawks will have made up and refocus their energy on winning. That’s sort of been the status quo for the two since being paired up in 2012, and one would imagine that isn’t changing because of a few uncomfortable months this offseason.