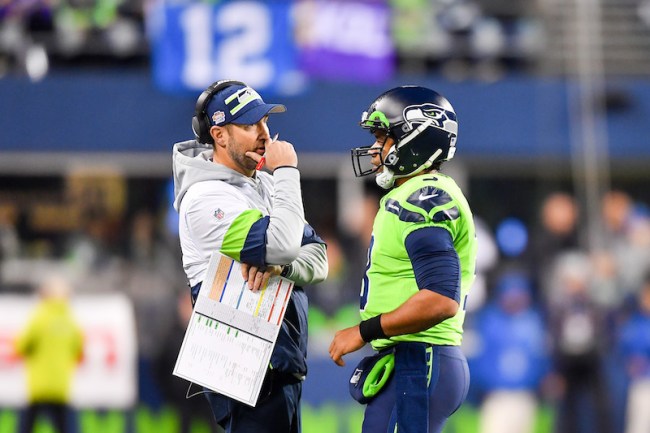 Russell Wilson has been the most accomplished quarterback in the history of the Seattle Seahawks, so when he signed a massive contract extension prior to 2019’s NFL season, it was a great sign for the franchise. Proving his worth even more, DangeRuss went out and played like an MVP early in the year, and, ultimately, guided Seattle to an 11-win campaign and another trip to the NFL Playoffs.

But something happened down the stretch of the regular season and the postseason to the Seahawks’ offense. It went… stale. Instead of big plays and a bunch of points, Wilson and his teammates were stifled, and, in the end, the lack of offense cost them in the NFL Playoffs against the Rams, where Seattle lost at home 30-20 in the Wild Card Round.

Instead of blaming Russell Wilson, the team did something else: Fired Brian Schottenheimer as offensive coordinator. It’s a move Wilson openly said he wasn’t a fan of, and recently posted this on his Instagram thanking his now former coach.

That’s not a good sign if you’re a Seahawks fan. Sure, on the surface, Russell Wilson might just be thanking his former coach for helping him the past three years, but just listen to what the franchise quarterback said when asked about the team getting rid of Schottenheimer.

Russell Wilson didn’t want the Seattle Seahawks to move on from Brian Schottenheimer as their offensive coordinator.

“If you’re asking me if I was in favor of it, no,” Wilson said, choosing his words carefully. “It wasn’t my decision to change [from] Schotty. But I think that Coach Carroll made that decision. I trust his decision.”

“I think it’s vital, it’s critical, super significant, obviously, that I’m a part of that process,” Wilson said. “Coach and I have definitely been talking about that, [general manager John Schneider] too as well. We’ve had some … great dialogue about the thought process of who we want, the leader … the innovator, all that kind of different stuff that you want. “The next person, whoever that is, it’s really critical that we’re on the same page at all times and always talking and vibing and really, really on the same page.”

OK, so I’m not trying to read into anything here, but does it seem like Russell Wilson’s just a little bit unhappy with the Seahawks right now? The dude has laid it on the line for the past nine seasons for the team, winning a Super Bowl and playing in another, so excuse him if he’s upset that Pete Carroll canned a coordinator who “let Russ cook” these past few years.

Gone were the dumb draw plays for three yards. Gone were the boring hitch routes for five-to-six yards. Instead, Seattle had explosive plays and looked like they were going to continue to excel in the next few years. Now the Seahawks have their franchise quarterback wondering what’s next, and trying to be involved in the hiring process. That’s never a good sign. It shows a little lack of trust, in my opinion.

Russell Wilson isn’t the type of player who complains much, and he’s not a prima donna who brings attention onto himself. But he and the Seahawks are at a crossroads right now when it comes to the next offensive coordinator, because, while Russ is still a superstar, just 32 years old, and says he wants to play till he’s 45, the team best not waste these next few seasons with a coach that restricts Wilson’s innovation on the field. Things could become really awkward, so no pressure or anything, Seattle.