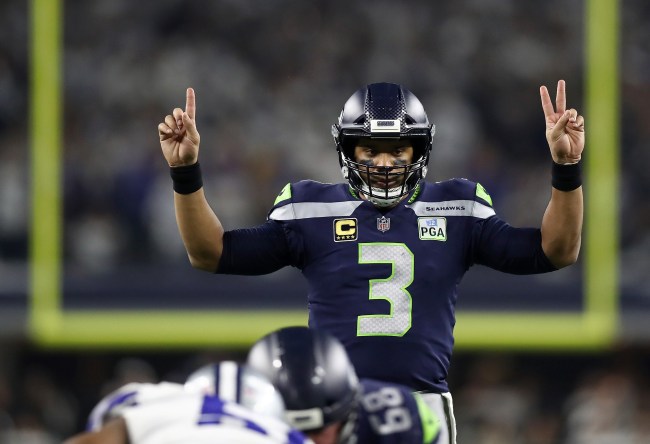 Russell Wilson just signed a massive contract extension with the Seattle Seahawks that’ll pay him a shit ton of money until he’s 34 years old, which, generally speaking, usually means it’s probably his last big-time deal to make that kind of cash. But the Super Bowl-winning quarterback doesn’t think like most people, which is why he plans on playing a helluva lot longer than what some may think.

While we’ve seen Tom Brady excel after age 40 — and pronounce he’s hoping to play in the NFL until he’s 45 years old — Russell Wilson seems to want to follow suit, revealing that he, too, wants to play till he’s in his mid-40s. That means that, with Wilson being 30 years old right now, the seven-year veteran aims to be under center in the league for another 15 years. That’s wild, but, hey, why not aim high, right?

Talking to Michael Silver of NFL.com, Wilson stated that it’s his “goal” to play for at least another decade, but that he’s hoping for plenty more years after that.

“Seven years has gone by so fast. You think about just turning 30 years and what I have for the rest of my career — for the next 10-15 years — I’m just fired up about it. You think about some of the best quarterbacks of all time, guys like Drew (Brees), guys like Tom (Brady), who (are playing into their 40s). I really look up to those guys. There’s so much more to do.”

As Russell Wilson pointed out in his conversation to Silver, guys like Brady and Drew Brees have redefined the NFL quarterback, showing that 40 may be the new 30 given the amount of success they’ve had in the past few seasons. While Wilson hasn’t had a major injury and continues to be smart about taking hits, his goal of playing until 45 years old will, probably, come down to how healthy he is and how much he can maintain that high-level of play.

Wilson’s shifty, nimble and athletic AF right now, but with that type of mobility last for another 1.5 decades in a gladiator-like sport? Probably not, but, given all the dude’s accomplished to this point in his career, not too many people will doubt he can achieve what he’s hoping to by playing until he’s 45.