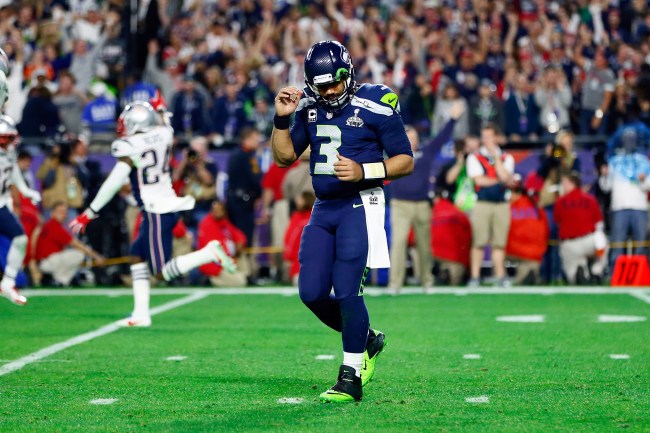 Russell Wilson is a positive guy. It’s in his nature. It’s part of his leadership. It’s how he lives his life and, presumably, why he’s been so successful in both his profession and his personal life. So it shouldn’t be surprising to hear that the same mentality that helped him go from an overlooked quarterback selected in the third round of the 2012 NFL Draft is what has helped him have a short memory when it comes to some of his failures.

While Wilson could sit down and list a ton of different times he’s failed, the most glaring one for football fans seems to be the time his Seattle Seahawks lost to the New England Patriots in Super Bowl 49. It wasn’t just a loss, but one that, still today, gets talked about as a major league choke job, with the Hawks calling a pass play from the two-yard line with 20 seconds left instead of just handing the ball off to Marshawn Lynch. As somebody who has lived in Seattle for the past 7.5 years, this one still crushes me, and might be the only time I wanted to punch a wall without any regard for the consequences afterwards.

But Russell Wilson isn’t letting the past keep him down. Joining Barstool’s Pardon My Take podcast, the Seahawks quarterback was blatantly asked how often he thinks about that loss. Some people live in the past and wonder what could have been, but that’s not in Russ’ M.O., which he also discussed in his response.

Barstool: “So with all that said, though, be honest, how many times just randomly in, let’s say, a given year, does it just pop in your head and you’re like, damn, we should have run. It’s not holding you back, you’re Mr. Unlimited, but honest, just driving down the highway randomly in the middle of August, it was just like, boop, pops in your head. Because that happens to everyone. How many times?”

Wilson: “It doesn’t really pop in my head, honestly.”

“I think the first year it pops in your head almost every day. But I think, you know, now, you know, for me, I’ve trained my brain every day to know that stuff’s going to happen. It’s a long, it’s a tough journey. And the role that I play, the position that I play, there’s going to be stuff that happens along the way. So, honestly, I don’t think about it. The only time I think about it is when someone either asked me, or when you watch the Super Bowl, they’ll show a clip, and alright, thanks, I get it.”

Look, the loss happened nearly six years ago, so one would imagine Russell Wilson has moved on from it by now. Then again, in sports — where championship opportunities are limited — these types of failures never seem to just fade away. In fact, they often haunt players for years, making them go down the rabbit hole of “what if…?”

That clearly isn’t Wilson, though, who used the loss to the Pats as motivation to get better and work harder. And it’s cool to hear him share some of the mental toughness that helped get him there — which, given the pandemic and difficulties 2020 has brought all of us, can hopefully inspire some other people to think similarly.