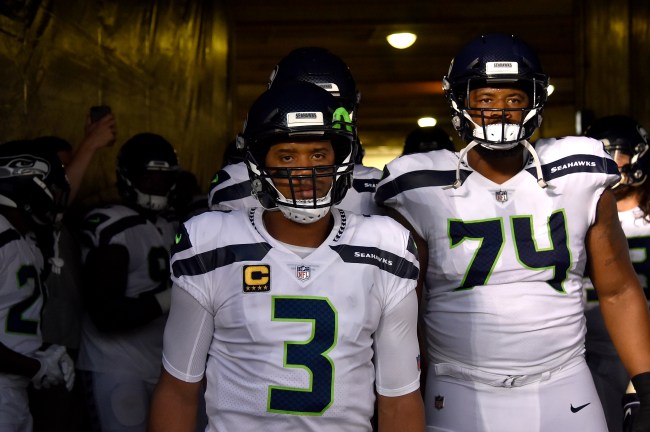 Russell Wilson is one of the most successful quarterbacks in NFL history. Not only has the Seattle Seahawks star won one Super Bowl, and played in another, but he’s made six Pro Bowl berths as well, showing that he’s got all the skills to be a future Hall of Famer one day.

While his on-field success is impressive, Russell Wilson knows football can only last so long, so he’s gotten involved in some business business ventures off of the gridiron, too. The former third-round pick has invested in a number of different companies, while even starting his own production company (West2East Empire) and fashion label (Good Man Brand). Oh, yeah, he’s also married to some singer named Ciara, so, you know, Wilson’s winning in pretty much all aspects of his life.

So, what’s Wilson’s secret to success? While there are probably a few different things, he recently shared one that Paul Allen shared with him. Allen, who founded Microsoft, was also the Seattle Seahawks’ owner until his death last year. But, during their time together, it’s clear Wilson picked the billionaire’s brain as much as possible about how to be successful outside of football.

“The biggest thing that I always learned about Paul, and that I always understood, was ‘do what you’re passionate about, do what you love,’” Wilson says. “He was a direct demonstration of that … [with] the things that he was able to do, from cancer research to brain research to creating Microsoft.”

It’s something Wilson has taken to heart.

It’s interesting (and useful) information that Allen gave Russell Wilson. As most of us all know, doing something that you’re passionate about typically leads to success because it heeds more of your attention. If you’re doing a job for a paycheck or feel unsatisfied, you’re more than likely going to fail.

That wasn’t the only thing Wilson said he learned from Allen, though, with the signal-caller saying that he’s always trying to learn from others who have been successful in both sports and business, which helps him stay focused on his own endeavors.

“Guys like Magic Johnson, who played a long career and he’s been very, very successful in creating [a media and real estate empire] and owning teams and stuff like that,” Wilson says. (Johnson is a part-owner of both the MLB’s Los Angeles Dodgers and the WNBA’s Los Angeles Sparks.)

“If you really want to be a mogul in this world, in terms of business, you’ve got to learn from others,” Wilson tells CNBC Make It, “but you’ve got to be bold enough to do it yourself.”

Russell Wilson has millions of dollars and can be a bit more picky about what ventures he wants to support or get involved with. But the advice from Paul Allen is true for anyone, no matter what your goals might be, so it’s cool to see Wilson sharing those lessons he learned while Allen was running the Seahawks.